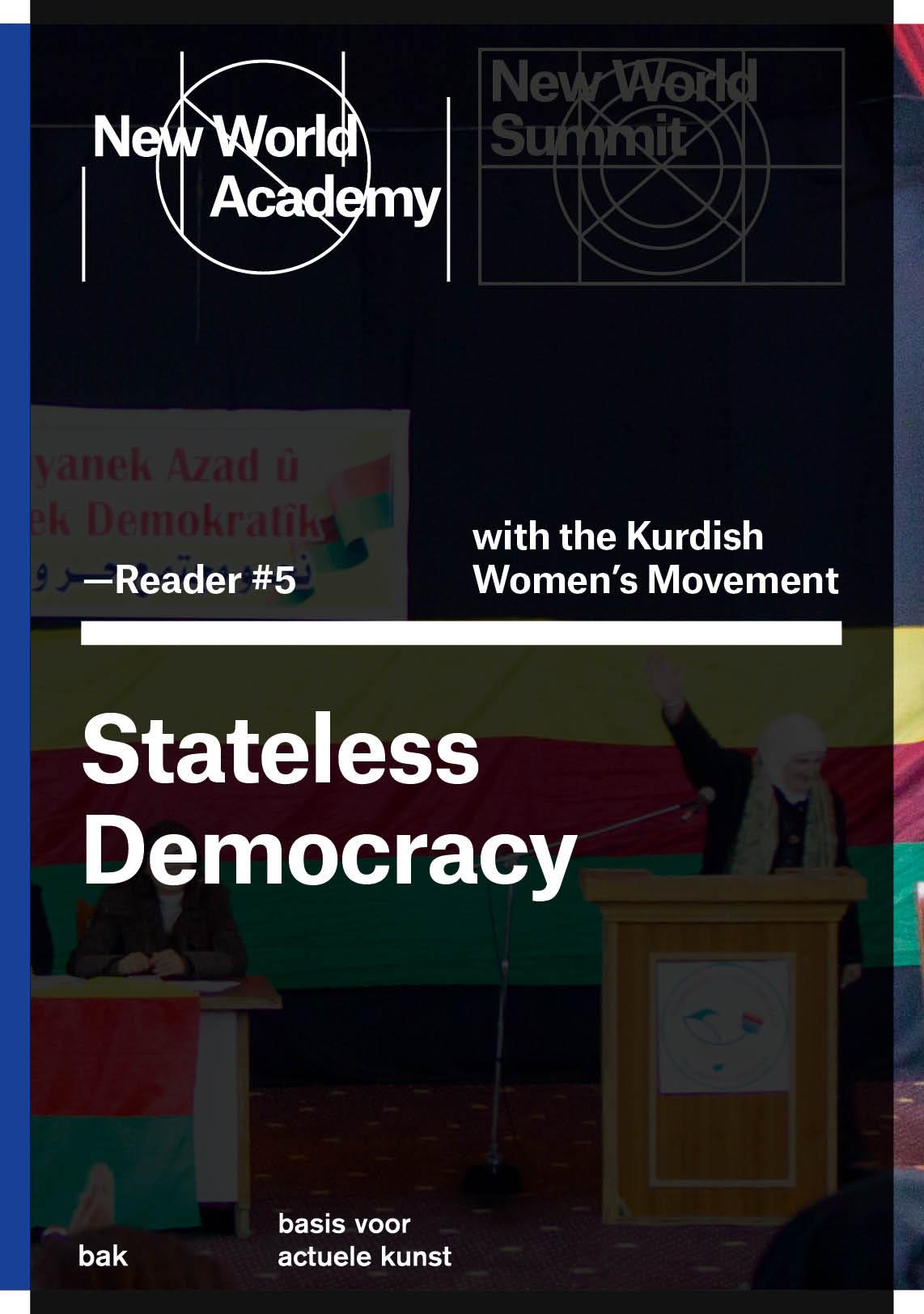 New World Academy is an alternative learning platform for art and politics established by artist Jonas Staal and BAK, basis voor actuele kunst. Developed together with the Kurdish Women’s Movement as a nomadic platform that unfolds throughout 2015, the fifth sequence of the New World Academy explores—from artistic, activist, and scholarly perspectives—the proposition of delinking democracy from the nation-state: the notion of “stateless democracy.” On this occasion, the fifth reader of the New World Academy, titled Stateless Democracy, has been published. This significant publication is launched at a conference organized on 30 May 2015 at De Balie, Amsterdam, with a keynote lecture by Kurdish journalist and writer Havin Güneşer, followed by a discussion on the Rojava Revolution with a panel of Kurdish and international artists and academics.

Edited by Reneé In der Maur and Jonas Staal in dialogue with the Kurdish Women’s Movement (in particular Dilar Dirik, Kurdish activist and a PhD student at the University of Cambridge, Cambridge) this fifth reader examines the itineraries of the Kurdish Women’s Movement—an umbrella organization that has been foundational in shaping the political objectives of the Kurdish liberation movement internationally, and more specifically across present-day Turkey and Syria.

If initially the Kurdish struggle, lead by the Kurdistan Workers’ Party (PKK), had aimed to establish an independent state, since the 1990s PKK leader Abdullah Öcalan, together with the Kurdish Women’s Movement, have turned to questioning the patriarchal and capitalist nature of the very concept of the nation-state itself. Within this process the Kurdish revolutionary movement developed an alternative model called “democratic confederalism” or “stateless democracy” that invoked a confederate composition in which gender-equality, self-governance, secularism, cultural diversity, communal economy, and social ecology form key pillars.

Since 2012 this proposition has been put fully into practice in Rojava, Western Kurdistan in Syria, in alliance with the peoples of the region. New World Academy Reader #5: Stateless Democracy provides key texts that offer an overview of both the political and cultural dimensions comprising what has now come to be known to history as the Rojava Revolution. The texts in the reader are as much an introduction to the model of stateless democracy practiced in Rojava, as a potential political paradigm through which to confront the many related crises in politics, economy, and ecology that we face across the world.

The reader is available in digital format (print is sold out).

New World Academy, founded by Staal and BAK in 2013, invites stateless political organizations to share with artists and students their views on the role of art and culture in political struggles. Together, they engage in critical thinking through concrete examples of transformative politics and develop collaborative projects that question and challenge the various frameworks of justice and existing models of representation. New World Academy proposes new critical alliances between art and progressive politics as a way to confront the democratic deficit in our current politics economy, and culture. Previous iterations of New World Academyhave been realized together with the cultural workers of the National Democratic Movement of the Philippines, the Amsterdam-based collective of refugees We Are Here, the open-source advocates of the international Pirate Parties, and Mouvement National pour la Libération de l’Azawad [the National Movement for the Liberation of Azawad].

The realization of New World Academy #5 and of its reader Stateless Democracy has been made financially possible by the DOEN Foundation, Amsterdam and is additionally supported through BAK’s partnership with the Centraal Museum, Utrecht, on the project Future Vocabularies-Future Collections (2015–2016).