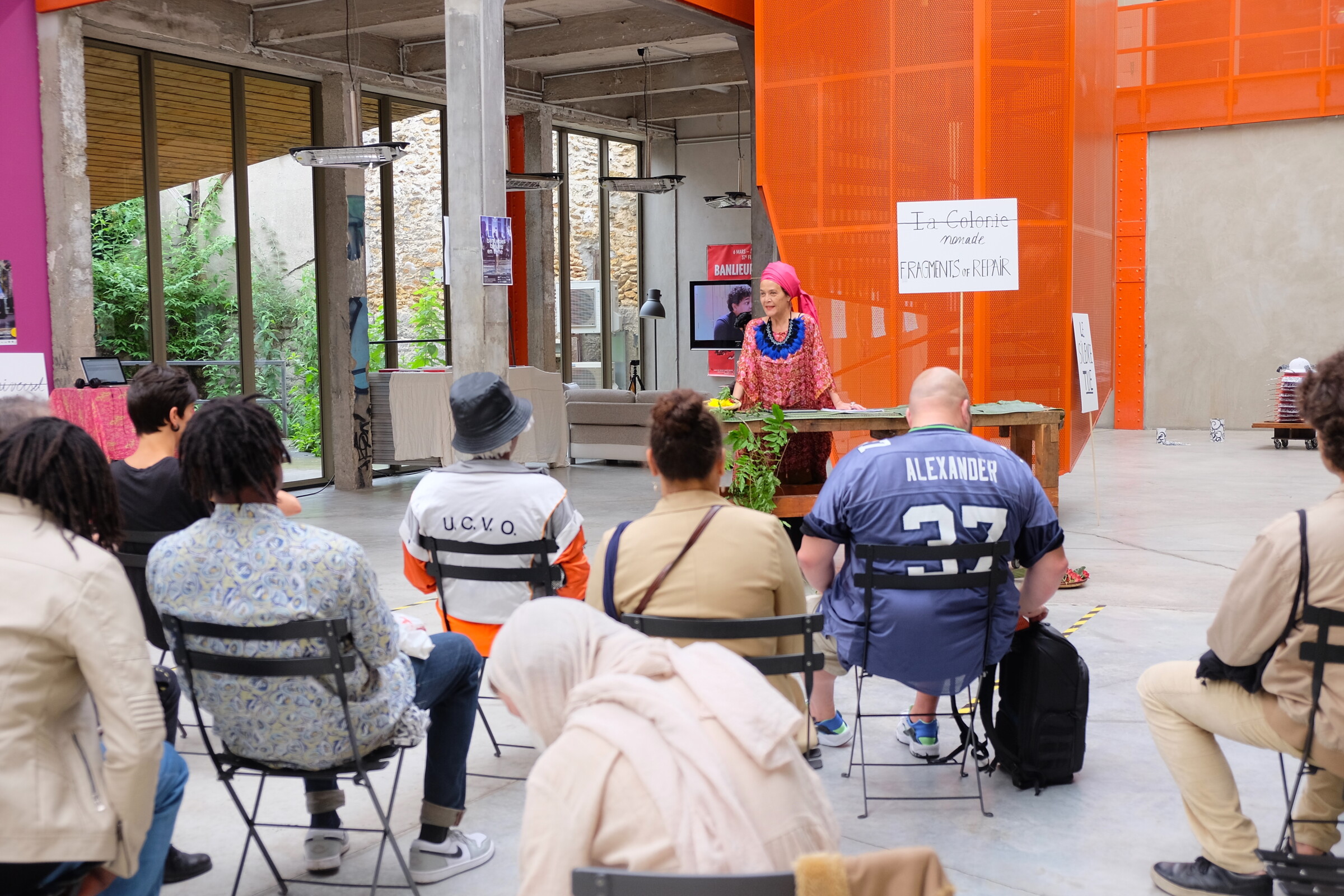 —
In Fragments of Repair, Attia proposes the notion of “decolonial repair” as a tactic to engage with planetary urgencies of collective mental health in a world wounded by the Covid-19 pandemic. Injury, wound, and repair have been key concepts across Attia’s artistic practice, especially in relation to the material and immaterial injustices of colonial violence that persist into the present. The current conditions bring these injustices into sharper relief, while adding additional injuries through chronic uncertainty, social isolation, exhaustion, loss, and fear. What pathways can repair—not a return to past ways, but an itinerary shaped by demands for decolonization and the politics of restitution—offer to life in and out of the viral and psychological pandemonium?

Fragments of Repair/La Colonie Nomade expands on this narrative, drawing on decolonial strategies as a means of meaningful survival and collective acts of repair in spite of the cruel capitalist “economy of exhaustion.”

Exhaustion—mental and bodily depletion—is endemic to capitalism. Capitalism is premised on extractivism that produces a constant exhaustion of all forms and forces of living—humans and animals, soil and subsoil, oceans and rivers, air and water—for the well-being of a select few. The Covid-19 pandemic has magnified capitalism’s underlying health epidemic of exhaustion and the psychic debility—including but not limited to anxiety, depression, and feelings of isolation—that arises from it. During quarantines and lockdowns there are, on the one hand, people with relative privilege working from home who manage their social and work connections through Zoom. Yet on the other hand, there is a spectral labor of millions of people—many women, many people of color—who keep the city sanitized, care for the sick and the elderly, and deliver food and goods to those who can afford to stay inside. This lopsided equation of those dependent on people working and living in increasingly exhausting conditions is part of what Vergès has described as the “economy of exhaustion.” In Vergès’s words, the economy of exhaustion has “a long history in the modern world: it started with colonial slavery, mining human energy to death; the Industrial Revolution adopted this logic, exhausting the bodies of white workers and children until they finally obtained a reduction of work hours and hard physical labor thanks to the exhaustion of racialized bodies in the colonies. Liberal and neoliberal countries still rest on mining to exhaust the bodies of migrants and people of color.”[1]

Aligning with decolonial perspectives, how could repair as decolonial strategy allow for brief moments of joyful surviving, as opposed to just bare, exhausted survival? How does decolonial practice as repair help develop collective tools for emancipation and resistance? How could repair, as a pragmatic intervention in one’s own life, enable escape from the dominant subjectivity of the neoliberal economy of exhaustion? How might people think together and enact repair in the wake of a pandemic which has been precipitated by that which is broken (social, ecological, and economic injustices)? And, in the face of what is irreparable, how can one understand repair as imperfect, unfinished, and always ongoing, in opposition to the routine of repairing all kinds of wounds and hiding their scars, which is, as Attia has shown, deeply tied to European modernity?

Fragments of Repair/La Colonie Nomade aims to go beyond a mere reporting on the conditions of the world and seeks to imagine and enact collective strategies and concrete gestures of repair. It also aims to inquire about the place and role of art in a politics of repair in the neoliberal-capitalist context of extraction and exploitation by (cultural) institutions, of savage inequalities, of intractable racism, sexism and xenophobia, and of global devastation of the lives of the racialized and the poor. Aware of the cultural institutions’ complicity in this situation, the conveners of La Colonie Nomade seek to offer a safe place where complicity is openly debated and resisted.

BAK’s main partner in the field of education and research is HKU University of the Arts Utrecht.