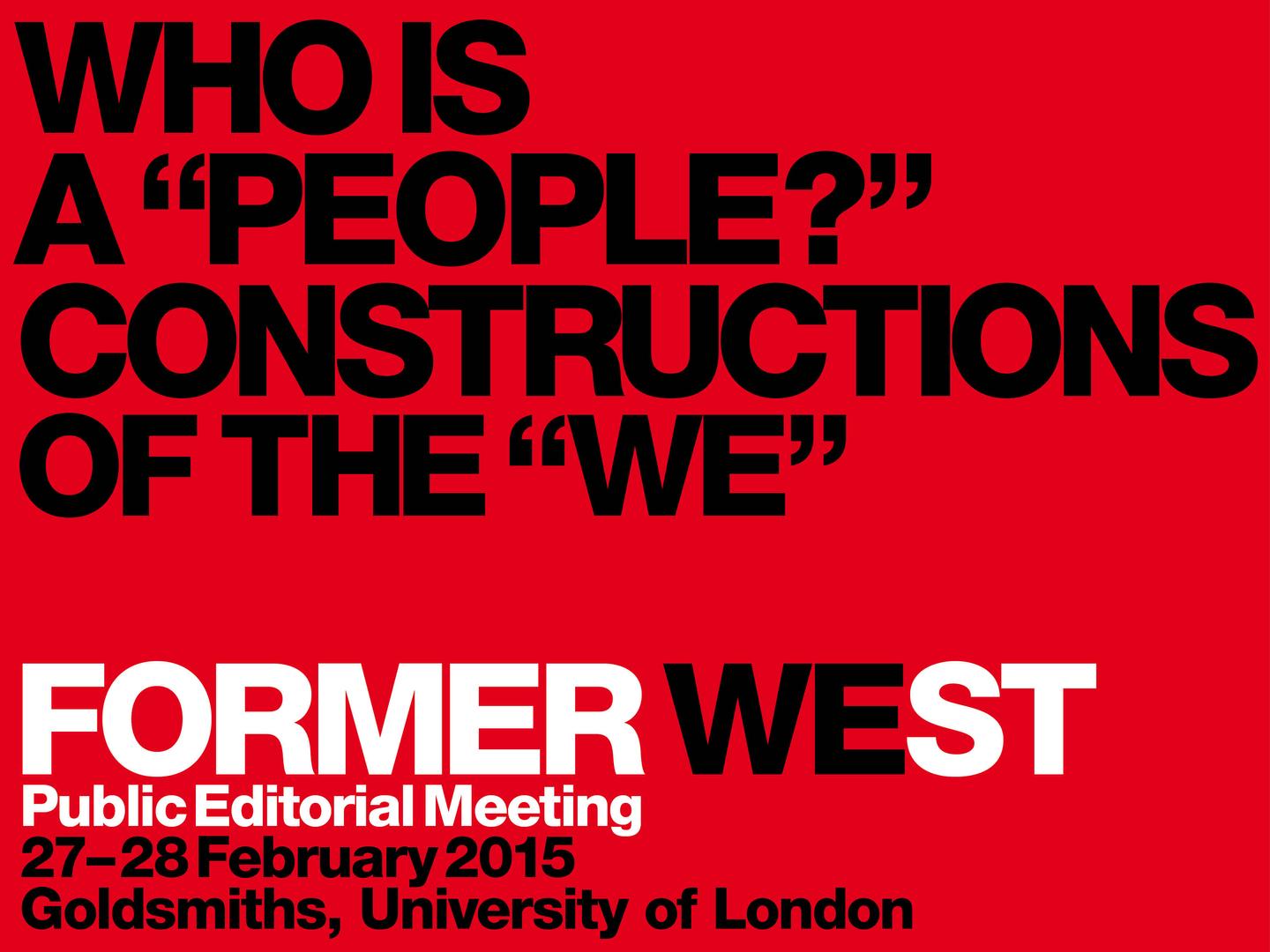 Following Berlin (2013) and Utrecht (2014), the next FORMER WEST Public Editorial Meeting is hosted by the Department of Art, Goldsmiths College, University of London, London on 27 and 28 February.

The format of the London Public Editorial Meeting consists of a series of presentations and conversations, which serve as entries into a wider trajectory of discussions between writers and the contributing audience. Titled Who is a “People?” Constructions of the “We,” it focuses on the notions of “publics” and “the people,” considering them first and foremost as politico-cultural constructions. Among other questions, the meeting asks: How is a “people” constructed and addressed within culture, the commons, politics, and history in the contemporary postmodern malaise? What is the role of the nation-state within global flows of capital and how can “former West” itself be understood as a concept within the postcolonial constellation?

The meeting follows several distinct but intersecting strands of inquiry and attempts also to locate the proposition of “former West” within the context of London—a locale that harbors a long legacy of postcolonial and racialized entanglements. In asking what is actually and historically implied by the West, not least when accompanied by the prefix “former,” the project proposes that it is possible to think beyond Western hegemony and acknowledges its passing. This historicization departs from the symbolic year of 1989—and the end of a bipolar world—positing that relations of identity and identification must be redescribed and reinscribed anew after these events, which continue to bear consequences for how we conceive of peoples and movements in terms of politics, migration, and cultural production.

If the categories of “visitor,” “viewer,” “spectator,” and “consumer” no longer correspond to the societal structures undergoing transformation, or uphold still-redolent forms of colonialism, how might we construct the figures that make up the collective entity of audiences and publics in today’s Europe? And if the insurgent realities and movements of people who demand a qualitatively different access to culture and decision-making constitute lines of new solidarities and commonalities across the wide spectrum of society, does the notion of the “citizen,” then, still hold its ground when used as point of distinction between those who do and do not hold rights and privileges under the nation-state? Is it helpful to think of these new commonalities in terms of “the people?” How else might we determine the notion of “we” in the newly appearing landscape of culture and politics in Europe?

The FORMER WEST Public Editorial Meeting: Who is a “People?” Constructions of the “We” is made possible by generous financial support from the European Union’s Creative Europe program.

For more information regarding the meeting, please see here.