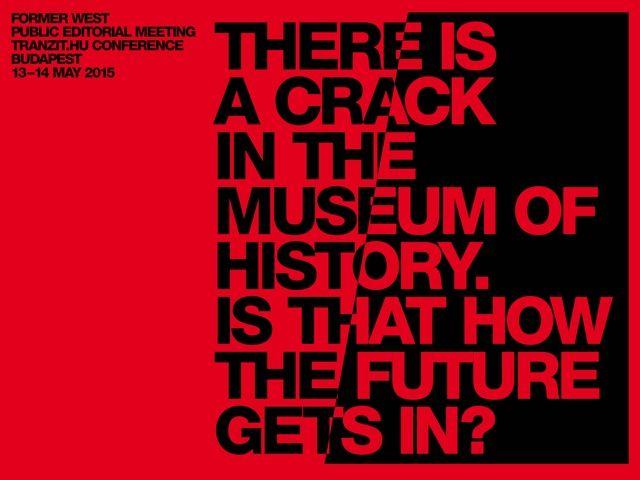 There is a Crack in the Museum of History. Is That How the Future Gets in? is a public editorial meeting and conference jointly organized by tranzit.hu, Budapest and BAK, basis actuele kunst, Utrecht. This two-day gathering takes place in Budapest on 13–14 May 2015, both as part of the FORMER WEST project led by BAK and tranzit.hu’s long-term research project War of Memories.

There is a Crack in the Museum of History. Is That How the Future Gets in? explores the final collapse of the teleology of the so-called post-communist transition to democracy, and one of its most striking symptoms: the fetishistic obsession of our political and artistic imagination with the past. Through a series of presentations and panels, artists, curators, theorists, activists, and historians reflect on the current crises of democracy, the return of fascism into the political arena, and the current mainstreaming of historical revisionism. Contributors discuss what role artistic practices and art institutions play in the collective production of the past and a possible reclaiming of the future.

The program consists of three intersecting strands of inquiry:

Towards the Worst of all Possible Pasts?

What was foreshadowed with the spectacular failure of the Arab Spring has become fully transparent with the Ukrainian crisis and an alleged return of the Cold War. Designed as the last progressive movement in what political scientist Francis Fukuyama once described as “the museum of history,” the process of the so-called transition to democracy, generated by the collapse of communism, has finally come to a standstill. Are democracy and capitalism “with a human face” just other “dreamworlds” of modernity’s short afterlife, now revealing themselves to be nightmares from which we are unable to wake up? How might we sustain hope in a world that desperately struggles to prevent the return of the worst of all possible pasts?

Performing the End of History

In modern times, history was an ignorant master. It was not a story of past events, but an event in itself. Is memory today, for which history itself has become a past to be remembered, not an expression of longing for the lost experience of history that one was able to learn from? Could this be why memory reaches out to the realms of art and performance, to re-enactments and body movements, so as to teach without possessing, sharing, or transmitting any knowledge—striving to be the cause of knowledge and not its owner? Indeed, art does not produce any knowledge of the past; but could it possibly turn the past into a teacher of life, a magistra vitae?

Long gone are the times when the past had its proper place in our historical consciousness. The historical consciousness that had once guaranteed our orientation within the time-spaces of modernity has evaporated into a myriad of memory cultures that hover over post-historical reality. One easily mistakes ghosts of the past for the contemporary. In today’s political reality, memory and oblivion often act as brothers in arms. Is this not the case in present-day Hungary, where the memory of the Treaty of Trianon threatens to divide the living even more deeply than it had divided the dead? Are the traumatic effects of this event a legacy of the past or a brand new product of contemporary power struggles? How could we prevent alleged traumas of the past from turning into much worse traumas in the future?

Video recordings of the meeting are available via the FORMER WEST digital platform at: www.formerwest.org.

There is a Crack in the Museum of History. Is That How the Future Gets in? is part of the culminating phase of the project FORMER WEST, which unfolds over the course of 2014–16 through a series of public editorial meetings leading to the realization of the FORMER WEST publication. The series is supported by the Creative Europe Programme of the European Union. FORMER WEST is organized and coordinated by BAK, basis voor actuele kunst, Utrecht. The activities of BAK are made possible by financial support from the City Council of Utrecht and the Ministry of Education, Culture, and Science of the Netherlands.

ERSTE Foundation is the main partner of tranzit.

A two-day program of discussions, sound works, film screenings, and DJ sets organized in the framework of the festival Le Guess Who? 2021 in Utrecht.

An online course that was prompted by the urgency to engage in collective thinking through, learning about, and imagining critical, politically-informed artistic practices that grasp—and intervene into—the present. Taught by Maria Hlavajova, BAK’s general & artistic director.