On Unhoused Music, (Im)Possible Realism, and the Unarchivable 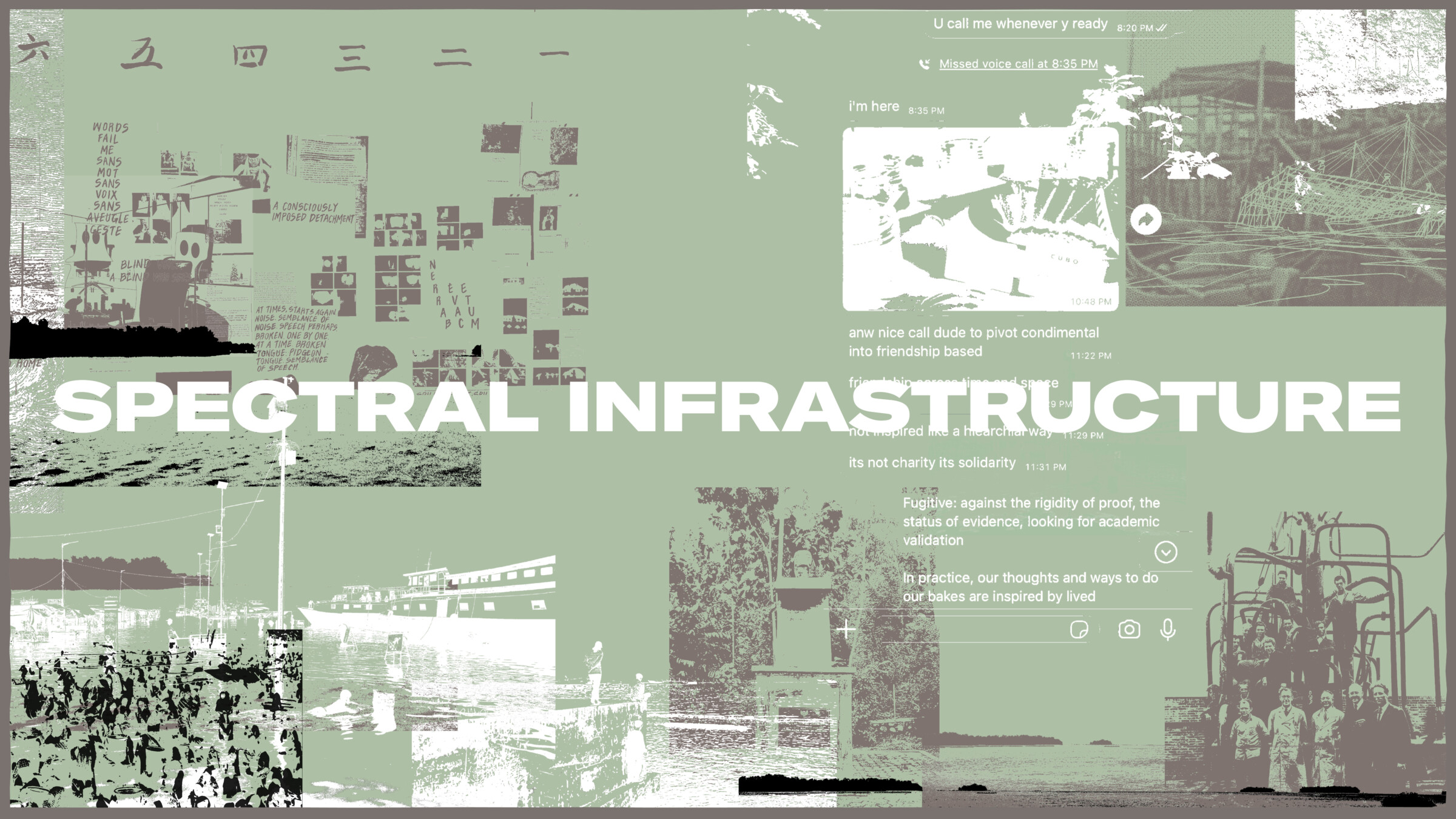 Convened by freethought collective. Part of The Hauntologists and Spectral Infrastructure research trajectories.

A weekend of presentations, conversations, and listening sessions with freethought, organized in collaboration with Le Guess Who? festival.

How did we come to believe that infrastructures, the beloved components of material progress, sustain us and deliver all that we need? By proposing the notion of a “spectral infrastructure”—a haunting presence within a structural organism—freethought collective puts forward a doubt that what is needed is both knowable and deliverable. Instead, “spectral infrastructure” gestures toward the hidden, unacknowledged textures and registers that dwell in mundane structures, allowing us to inflect the necessary with the desired. In a series of presentations, conversations, and listening sessions, freethought sets out to reveal the spectral within the perceptible by invoking notions of “the unarchivable” and “(im)possible realism”; by navigating “airs” that sustain both resonance and remnants; and by collectively exploring music that “unhouses” the claims to property and individual accumulation—they try and agitate the belief that everything eventually delivers.

Unhoused Music inquires into the relationship between the sound of music and a sense of place—one that is sometimes so direct that it appears almost intuitive. The connection between jazz and New Orleans, dub and Kingston, house and Chicago, and techno and Detroit, for example, seem to suggest that music is another kind of urbanism—a different way in which the city inhabits us.

But how do we square that with the proposition that if Black music is, as scholar and author Fumi Okiji says, a particular kind of dwelling, it is both a refuge for the homeless and a tradition of criticism whose radicality resides in the fact that the idea of home ownership was always a trap?

Across a sequence of three conversations and various selections of music, Unhoused Music considers the ongoing work of Black music, and how it temporally rearranges the collective desire for space, place, home and land—generating a very different sense of social ecology, urban planning, and historical time.

About Le Guess Who?
Le Guess Who? is a celebration of sound, returning to Utrecht 10–13 November 2022 for its 15th anniversary edition. Dedicated to boundary-crossing music and culture from all over the world, Le Guess Who? platforms underrepresented sounds that are rarely heard in other places; sounds that have the power to enrich lives.

11.45–13.00:
The Unarchivable
Presentation by Irit Rogoff and Nora Sternfeld

The archive has always held out the promise of stable continuity and the illusion of completeness. In invoking “the unarchivable” we suggest that archives set up improbable categories and the look to fill these. All around there is recognition of an existing agitation in the archive; presences that refuse their categories; inventive fictions that claim truthfulness; and a constant taunting of fake historical stabilities. This presentation looks to “the potential otherwise” that taunts the archive: affect, memory, resistance, waywardness, and stubbornness swirling in a state of refusal. It is in the performance of refusal rather than completion that “the unarchivable” can be located.

Drawing on extract from this air (2022), his site-responsive work with the musician and composer Hahn Rowe installed at BAK, Adrian Heathfield discusses the ways in which the collaboration conceives air as a spectral infrastructure. In contemporary life, the violent regulation of toxicity is the means through which the right to breathe is unevenly distributed, the way one’s breath is taken. This short talk also discusses the political ecologies of the buildings in which art is made and witnessed, and their relation to infrastructural violence and climate catastrophe.

Developed as an ongoing conversation, (Im)possible Realism departs from anthropologist James Clifford’s discussion of ethnography as a “zone of contact,” an imaginary and material political space in which cross-cultural, imperial, and capitalist modes of history and geography are enacted, unlearned, and undone. Ethnography is proposed as a practice that engages with the unexpected and the emergent, representing historical contradictions through juxtaposed stories. It is a disposition that does not smooth over reality’s surreal, unfinished, excessive, and paradoxical elements. (Im)possible realism thus works to expand the maps of history through partial and multiple perspectives that can represent incompleteness and resist dialectical transcendence.

17.00–18.30:
The House that Detroit Built*
Musical selections and conversation with DJ Lynnée Denise and Louis Moreno

This session inquires into the overlooked genealogies of Black music that shaped the electronic sound of Detroit. Picking up from DJ Lynnée Denise’s emphasis on the influence of jazz musicians Dorothy Ashby, Betty Carter, and Alice Coltrane, the session focuses on how the motor city’s interpretation of house music made possible the planetarization of the Detroit sound.

11.15–11.30:
What Remains (What Still Burns)
Interlude by Adrian Heathfield and Irit Rogoff

Bringing together the discussion on “the unarchivable”and that on “(im)possible realism”, Zone of Contact reflects on contemporary museums and art institutions as “zones of contact”; that is, spaces of dialogical articulation of a common ground, cutting across multiple cultural and identarian formations and uneven material conditions. Rather than salvaging the modernist ideal of the public museum, or surrendering to its current neoliberal logic, we take an abolitionist stance and, following Ariella Aïsha Azoulay, propose “to strike the museum” not as a form of disruption, but as an opportunity to unlearn imperialism and care for the world.

14.30–16.30:
“There is a Location for All of Us…”*
Musical selections and conversation with Louis Moreno, Dhanveer Singh Brar, and Paul Rekret

In this session, authors and scholars Dhanveer Singh Brar and Paul Rekret are asked to pick a piece of music in response to a set of remarks that theorist Cedric J. Robinson made in 1996 about historian C. L. R. James’s conceptualization of place and location—as seen in the quote above. The conversation explores the contact zone of connections between a number of recent publications: Jazz as Critique: Adorno and Black Expression Revisited (2018) by Fumi Okiji; All Incomplete (2021) by Stefano Harney and Fred Moten; Teklife, Ghettoville, Eski: The Sonic Ecologies of Black Music in the Early 21st Century (2021) by Dhanveer Singh Brar; and Take This Hammer (2023) by Paul Rekret.

17.00–18.30:
On Broadwater Farm: from Son House to Dub Housing*
Musical selections and conversation between Edward George and Louis Moreno

Artist and filmmaker Edward George explores how Caribbean consciousness—sonified through the music of dub—gives the housing estate of Broadwater Farm in North London a peculiar significance in understanding how Black diasporic music creates a different relationship to time through space.

Due to existing copyrights, this event can’t be live-streamed and will not be available for viewing on our website.

Both a BAK ticket and a Le Guess Who? wristband provide access to the full program, including the Unhoused Music sessions (in collaboration with Le Guess Who?), as well as BAK’s current exhibition The Hauntologists.