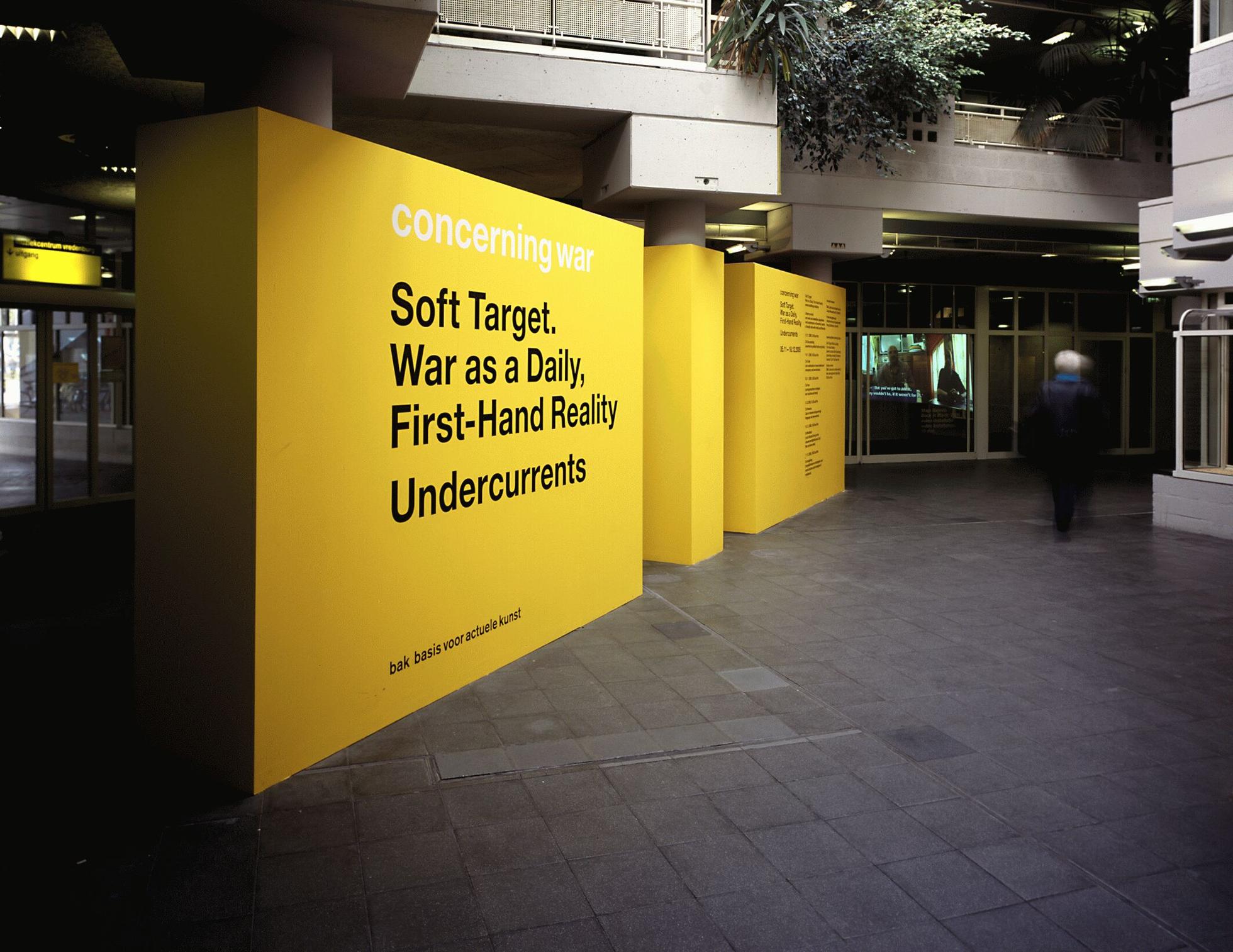 For millions of people in the world, war is a daily, first-hand reality. For those of us in the West, the direct experience of war has only recently become real again, now that a diffuse and internationally operating group of terrorists is not keeping to the old “agreement” that wars are fought between nation-states. War is becoming unpredictable, frighteningly palpable, and near.

In Regarding the Pain of Others (2003), Susan Sontag writes about how war is unimaginable for those who do not experience it personally. “We truly can’t imagine what it was like. We can’t imagine how dreadful, how terrifying war is—and how normal it becomes. Can’t understand, can’t imagine.” The media broadcast the most gruesome images from the global battlefield live into our living rooms daily, images that are beyond our understanding and compromise our powers of reasoning. The literal image is not sufficient to grasp reality; it requires mediation.

The inability to articulate or represent the experience of war has been cited by writers and artists throughout the ages, yet they often attempt to do just that. Those who experience the traumas of war are themselves often torn between the impulse to bear witness and the necessity of forgetting. The role that memory plays in this dilemma is central. In Lidia Ginzberg’s novel Zapiski blokadnogo čeloveka (Surrounded, Notes from a Siege) (1983), which recounts her experiences during the siege of Leningrad by the Germans, she expresses this struggle: “We observe the law of forgetting, one of the cornerstones of social life, together with the law of memory—the law of history and art, guilt and remorse.” Memory has been called the most powerful and most invincible weapon that there is. Indeed it is our memories that make us human. But they are continuously interpreted and rewritten.

Goya, who has been called the first genuinely realistic painter of war scenes, did not create his famous series Los desastres de la guerra, about the Spanish war of 1808-1813, on the basis of his own experiences, nor in a realistic style. And yet, his comments in the captions seem to suggest the opposite: “I have seen it,” “This is the truth,” “You can’t look at this.” Goya did not depict the war literally, but revealed its essence.

The works in Soft Target… go beyond the literal registration of wartime suffering, but also beyond the media representation of war, which many contemporary artists take as their subject. The participating artists look further than the “truth” of the literal image, accepting no simplifying interpretations of reality and fiction, good and bad, us and them, friend and foe. Their images deviate from reality, re-edit it, and manipulate it, falsify it, and make this falsehood visible. Yet these works are not anti-war pamphlets or agitprop in favor of war: none of the artists thinks that his or her work will influence the course of war or will turn public or political opinion. Instead these works are intense attempts to grasp the phenomenon of war and its consequences for the lives of individual people. They force one to reflect, to set aside prejudices, to think about one’s own position, about “What if…?”

For those who are looking for a spectacle of shock-and-awe, Soft Target… is the wrong target. Soft Target… is also unsuitable for visitors who want to consume the exhibition quickly: there are fourteen hours of material to view on film and video alone. The extensive materials made available to viewers of the exhibition reflect our conviction that reaching a new understanding of the inherently complex phenomenon of war requires concentration, openness, and fresh perspectives. Moving beyond conventional representations and easy answers, Soft Target… presents an opportunity for viewers to absorb themselves in different narratives and positions dealing with war and violence—issues that are indeed becoming more and more a part of our own daily, first-hand reality.

This exhibition is curated by Brigitte van der Sande.

Adela Peeva
Whose is This Song?

Maja Bajevic
Back in Black