exhibition curated by What, How & for Whom/WHW 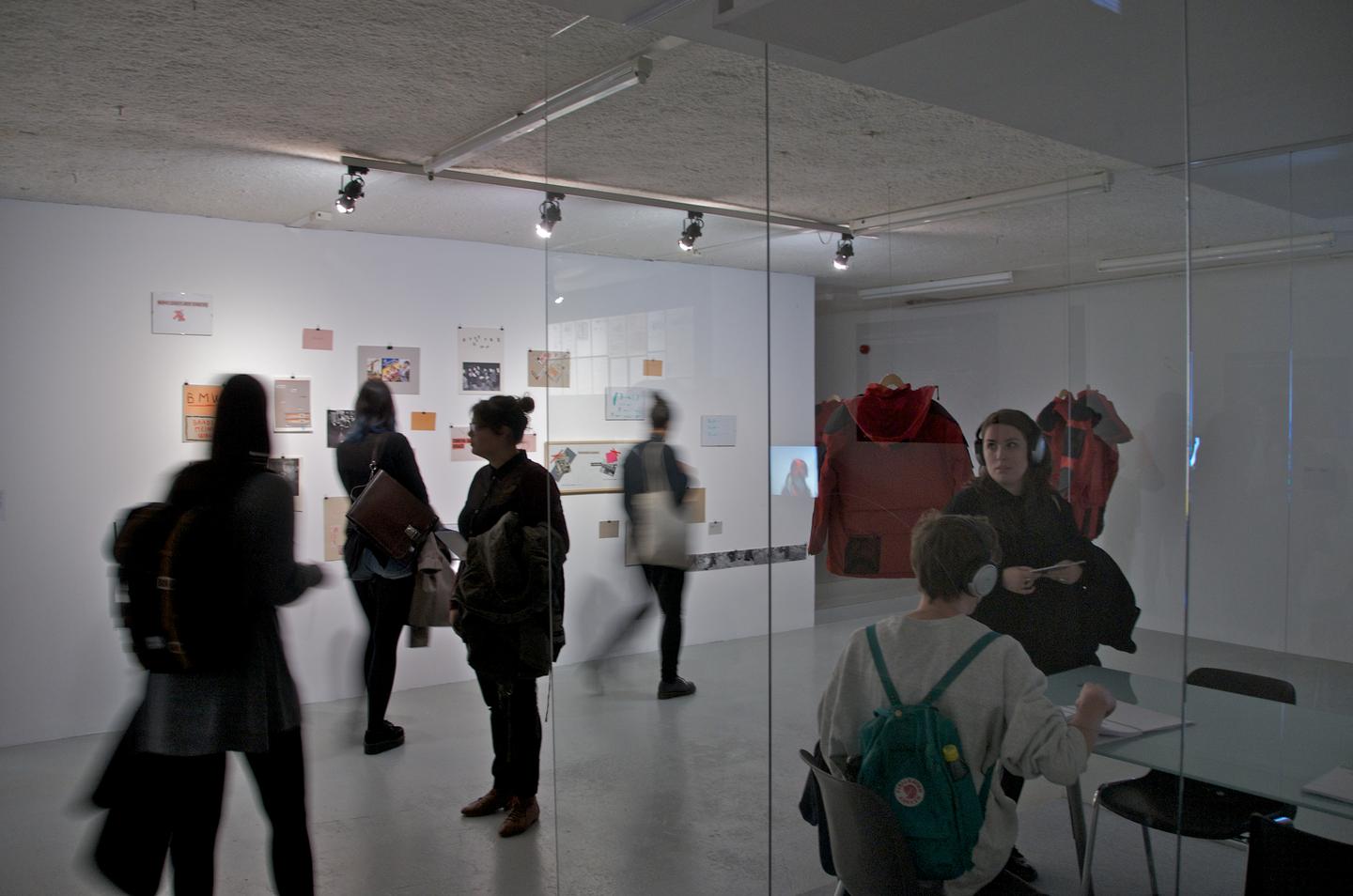 The exhibition engages in a dialogue with a provocative claim made by Slovenian sociologist, literary theorist, translator, and political activist Rastko Mocnik in his collection of texts titled How Much Fascism? (1995). Mocnik suggests that we no longer need to ask ourselves whether “new local populism, new ‘fascism,’ [and] new right-wing extremism” drive the contemporary condition, but rather, how much they drive that condition. We must attend not only to the open manifestations of fascism, though we witness more and more of such instances and one needs to ponder how societies that permit and tolerate such phenomena still “qualify” as democracies. More importantly, WHW suggest, “we need to turn our attention to the silent fascism that is becoming normalized through the systematic violence seeping into the laws and everyday administration practices of the nation-state, and to assess the mechanisms of oppression and the various symptoms of contemporary fascism that are being presented as unavoidable, pragmatic necessities.” In sync with these thoughts, the artists in the exhibition inquire about the possibility of art vis-à-vis such circumstances and invest in the cognitive power of art and the potential within the aesthetic experience of questioning reality.

How Much Fascism? is a research exhibition within the framework of BAK’s long-term project FORMER WEST (2008–2016), which is generously supported by the Mondriaan Fund, Amsterdam and the EU Culture Programme, Brussels. Following the exhibition opening, Part Two of the 3rd FORMER WEST Research Congress: Beyond What Was Contemporary Art takes place on 29 September 2012 at the Utrecht School of the Arts, Mariaplaats 28, Utrecht.

The exhibition How Much Fascism? is a continuation of the exhibition Details at Bergen Kunsthall, Bergen which has been the starting point of ongoing research that will continue with an exhibition at Extra City Kunsthal, Antwerp co-curated with Mihnea Mircan and a series of events within the project Beginning As Well As We Can (How Do We Talk About Fascism?) at Gallery Nova, Zagreb, Grazer Kunstverein, Graz, and Tensta Konsthall, Stockholm.

Avi Mograbi (born 1956) is an Israeli film director whose projects, regularly centered on the conflict between Israel and Palestine, examine how violence impacts the individual. Mograbi frequently appears in his films, taking the position of both director and concerned citizen in seeking to understand what he witnesses. Recent films include: Once I entered a garden, 2012 and Z 32, 2008. Mograbi lives and works in Tel Aviv.

Burak Delier (born 1977) is an artist who explores the relationship between capitalism and contemporary artistic practices. His work incorporates guerrilla art tactics and absurdist humor, and also employs the strategies of the very neoliberal media with which he disagrees. Recent projects and exhibitions include: the research project Art Facts, SALT, Istanbul, 2012 and 8th Taipei Biennial, Taipei, 2010. Delier lives and works in Istanbul.

Cesare Pietroiusti (born 1955) is an artist who creates ordinary situations, conducting exchanges with people, performing tasks, even making publications, but revealing their incidental, concealed, or seemingly insignificant qualities. In doing so, he sheds light on that which is often ignored or potentially problematic in our day-to-day existence. Recent projects in which he has been involved include: the exhibition Declining Democracy, Fondazione Palazzo Strozzi, Florence, 2011 and the artist-run school Wide Open School, Hayward Gallery, London, 2011. Pietroiusti lives and works in Rome.

Etcétera… (established 1998) is a collective whose practice includes poetry, theater, and visual art. Their artworks, manifestos, and actions often take part in public demonstrations and connect with other groups engaged in struggle. Recent exhibitions include: From the Relative Truth to the Absolute Error, Smart Project Space, Amsterdam, 2011 and 11th Istanbul Biennial, Istanbul, 2009. Etcétera… is based in Buenos Aires.

Jonas Staal (born 1981) is an artist and writer. His work involves interventions in public space, exhibitions, lectures, and publications, centering on the relationship between art, politics, and ideology. Recent exhibitions include: 7th Berlin Biennale, Berlin, 2012 and Tricksters Tricked — (un)covering identity, Van Abbemuseum, Eindhoven, 2011. His publications include: Art, Property of Politics III: Closed Architecture (2011) and Power?… To Which People?! (2010). Staal lives and works in Rotterdam.

Marina Naprushkina (born 1981) is an artist whose work in media including painting, video, and installation, concentrates on power structures in nation-states, often making use of nonfiction material such as propaganda issued by governmental institutions in Belarus. Since 2007 she runs the Office for Anti-Propaganda, which participates in and organizes political actions and also publishes newspapers. Recent exhibitions include: Moscow International Biennale for Young Art, Moscow, 2012 and 7th Berlin Biennale, Berlin, 2012. Naprushkina lives and works in Berlin.

Milica Tomic
One day, instead of one night, a burst of machine-gun fire will flash, if light cannot come otherwise (Oskar Davico)

Milica Tomic (born 1960) is an artist who in her work researches, unearths, and makes public issues of political violence, memory, and trauma, attending particularly to tensions between personal experience and media-constructed images. She is a co-founder of the Yugoslav art/theory group Grupa Spomenik [Monument Group] and of the international platform Yugoslav Studies and Working Group Four Faces of Omarska. Recent exhibitions include: 10th Sharjah Biennial, Sharjah, 2011 and Milica Tomic, Museum of Contemporary Art, Belgrade, 2010. Tomić lives and works in Belgrade.

Mladen Stilinovic (born 1947) is an artist whose work takes the form of collages, photographs, artist books, paintings, installations, actions, film, and video. Between 1982 and 1991 he ran the PM Gallery in Zagreb. From 1975 to 1979 he was a member of the Group of Six Artists and from 1969 to 1976 he worked with experimental film. Stilinovic’s recent exhibitions include: Sing!, Ludwig Museum, Budapest, 2011 and Insulting Anarchy, Galerie Martin Janda, Vienna, 2011. Stilinovic lives and works in Zagreb.

Superflex
Foreigners, please don’t leave us alone with the Danes

SUPERFLEX (established 1993) is an artists’ group founded by Bjornstjerne Christiansen, Jakob Fenger, and Rasmus Nielsen. They describe their projects as tools. A tool is a model or proposal that can actively be used and further utilized and modified by the user. Recent exhibitions include: Bankrupt Banks, Peter Blum Gallery Chelsea, New York, 2012 and Modern Times Forever, IHME Festival, Helsinki, 2011. SUPERFLEX is based in Copenhagen.

Trevor Paglen (born 1974) is an artist, writer, and experimental geographer, whose photographs and videos focus on the intelligence community’s covert world of secrets. His work draws attention to everything from illusive budgets to military base locations to mysterious disappearances. Recent exhibitions include: After the Gold Rush, Metropolitan Museum of Art, New York, 2011 and Magical Consciousness, Arnolfini, Bristol, 2011. Paglen lives and works in New York.

Exhibition text
How Much Fascism?
by What, How & Whom/WHW

Newsletter
How Much Fascism?