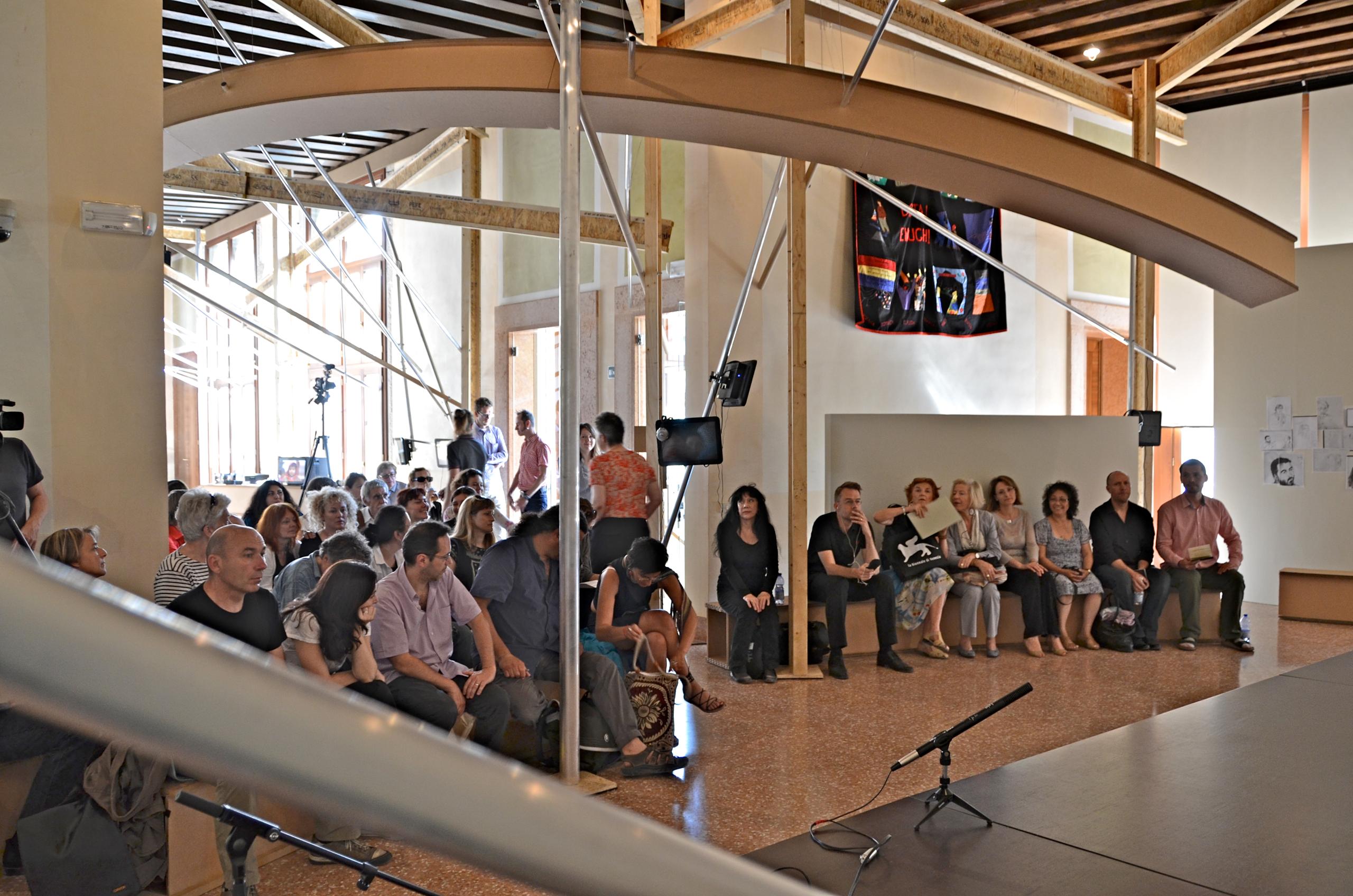 Call the Witness is a project of the Roma Pavilion, which takes place as a collateral event in the framework of the 54th International Art Exhibition – La Biennale di Venezia 2011. A makeshift exhibition evolving over the course of the Venice Biennale preview days through the flux of live “testimonies”— works of art, performances, talks, and conversations by and with artists, thinkers, and politicians—Call the Witness considers the situation of the Roma and Roma art as emblematic of a world filled with inequality and oppression today, and in solidarity with the largest minority in Europe speculates about another, hopeful future.

Having found its inspiration in the judicial practice of Kris-Romani—a traditional Roma court as well as a forum for conflict resolution and the mediation of disputes, which exists within some Roma communities—the project calls on Roma artists to bear witness, through works of art, to their communities’ struggles as they are caught in the paradox of being at once assigned to the edges of mainstream society and at the center of this society’s discriminatory order of control. One needs only to think of recent political events that have specifically targeted the Roma, such as deportations, forcible repatriation, and ethnic registration in many nations in Europe. Yet rather than engaging in accusations and finger-pointing or putting the victimization of others on display, the “proceedings” and “deliberations” in the Roma Pavilion are meant to function as propositions, both poetic and political, for how one could envision the restoration of mutual respect, ensure the future coexistence of parties in conflict, and inspire the acceptance of differences as a key ingredient of the very possibility of being together.

Bringing an ethos of dialogue and negotiation into the context of the Venice Biennale, an institution imbued with—and even constituted from—the highly problematic and exclusionary structures of nationalism and national representation, the Roma Pavilion offers its transnational, even extra-national, character in a modest attempt to counteract the widespread hostility towards Roma communities found across Europe today. In a spirit of reciprocity, hospitality, and inclusion, an invitation to contribute to the Roma Pavilion has been extended to artists, thinkers, and activists of both Roma and non-Roma origin, who through their practice recognize that the very condition the Roma communities find themselves in is in fact exemplary of the state of the world we all find ourselves in.

The site of the project—partly a space for an imaginary court to unfold, partly a conference and performance stage, and at the same time a broadcasting studio of sorts, as well as, most importantly, an exhibition venue—is in itself an artistic interpretation of a visionary artwork by Dutch artist Constant Nieuwenhuys (1920–2005).[1] In 1956–1958, Constant elaborated a design for a nomadic camp for Roma families, who had been driven out of the Italian city of Alba. His friend artist Giuseppe Pinot-Gallizio had offered the Roma families refuge on his land, and this gesture of hospitality and solidarity prompted fellow artist Constant to help to envision its architectural plan. Embedded in the Roma way of life, Constant’s project Design for a Gypsy Camp was in fact a paradoxical proposition for a nomadic settlement, merging the contradictory desires for unrestricted mobility and the need for a base for living. However Constant went further than planning a Roma community site; it was here that his radical ideas regarding the itinerant character of future generations to come were born (and these considerations were the foundation of his infamous work New Babylon (1956–1974). Deeply inspired by his experience, Constant went so far as to claim that like the Roma, we too—indeed everyone—are caught as if simultaneously inside and outside of the hegemonic order, “…becoming nomads once more, wandering over the earth, not looking for rest but for dynamic motion.” Envisioned as an open system of mobile walls and spiraling wires on a circular platform, Constant’s model Design for a Gypsy Camp[2] put forward a radical invitation to otherness and embraced alterity as a pivotal prerequisite for the possibility of another, better world.

Fifty odd years later, there is little if anything that the majority population has learned and adopted from the generous spirit of artistic experimentation and intellectual thinking about the way of life of the Roma people. Instead, in today’s Europe members of the Roma community, whose fate links to other outcast populations living on the margins of western society—from guest workers to refugees—discriminated against on all possible levels, from education to health care to housing to job possibilities.

This situation, so it at least seems to me, presents the field of art and intellectual practice with renewed urgency. It brings an essential question to mind: if the space of art is indeed where the world could be imagined otherwise than as we now know it could it be that, against all odds, the Roma Pavilion—which does not belong exclusively to any one nation—provides us with the possibility and an invitation to make it everyone’s? After the Roma artists have actively taken a stand to claim their right to speak out and narrate the injustices of the contemporary moment, it is the task of all of us not only to listen but also to carry the vision of another world into another future.

[1] Dutch artist Aernout Mik has reinterpreted Constant’s _Design for a Gypsy Camp _in the context of the Roma Pavilion project.

[2] Though the plan was never realized, a model of Constant’s Design for a Gypsy Camp has been carefully preserved as part of the collection of the Gemeentemuseum, The Hague, the Netherlands.

This project is the outcome of a truly collective effort. Of course my sincere thanks go to all the participating artists, thinkers, and activists who have taken a stand and offered their testimonies in the context of the Roma Pavilion. Specifically, I would like to thank Suzana Milevska, who came up with the original idea and titleCall the Witness, and who invited a number of Roma artists to take part in the project. She also curated an exhibition of the same title at BAK, Utrecht. I would like to also thank Tom McDonough, who pointed out Constant’s Design for a Gypsy Camp to me, and offered inspiration and intellectual guidance in understanding its importance. Crucial in putting together the testimonies was Daniel Baker, without whose knowledge, patience, and support the project would not have been possible, and to whom I would like to express my deepest gratitude. Last but not least I gratefully acknowledge commitment, dedication, and at times even courage, shown by all those individuals and institutions—including the entire BAK team—who contributed to the project, financially and otherwise.