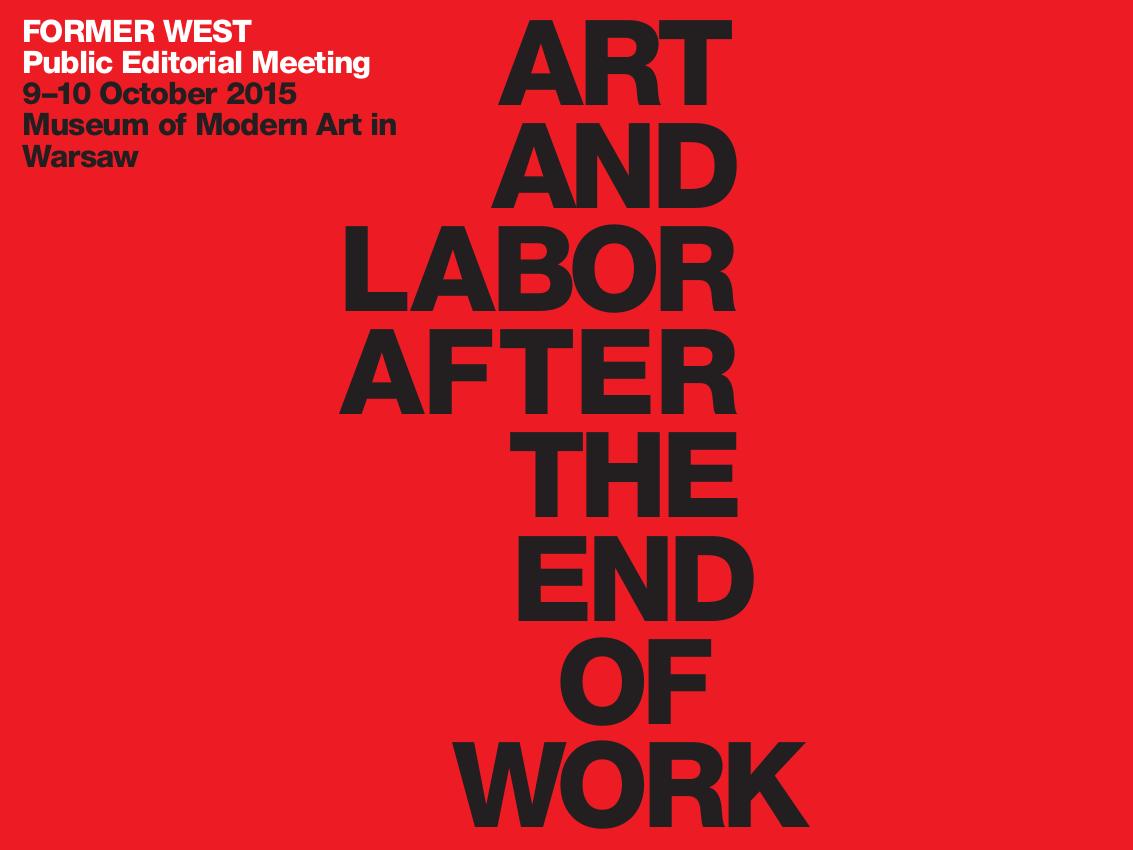 Art and Labor after the End of Work—a collaborative project by BAK, basis voor actuele kunst in Utrecht; the Museum of Modern Art in Warsaw; and the Free/Slow University of Warsaw (F/SUW)—is a FORMER WEST Public Editorial Meeting that takes as its starting point F/SUW’s case study of labor relations in the arts, The Art Factory (Bęc Zmiana Foundation, Warsaw, 2014). The F/SUW report maps present-day working patterns and distribution of resources in contemporary art in Poland, and describes a familiar picture of enthusiasm-driven overwork in a field characterized by poor economic conditions, class privilege and those without, underlying precarity, and lurking exclusion. Art and Labor after the End of Work situates these issues within the wider political economy of contemporary capitalism and cumulative theorizations of art and labor. Posited as a political problem, these working conditions are examined through the prism of art-related activism that seeks to respond by building structures of mutual support, organizing trade unions, denouncing injustice, constituting the commons, and instigating occupations.

Considering the setting for this gathering, as one of the “wonder stories” of the post-Communist Europe and expansion of the European Union, Poland finds itself part of the tale of so-called “catch-up modernization.” While this myth might suggest that countries like Poland will sooner or later “catch up” with the more affluent European West, it has nonetheless proven to be a debatably singular and inappropriate mirage. With Poland’s economy still based on low-cost industrial and agricultural production, and with social inequality growing, we might be facing not only the failure of such an idea of catch-up modernization, but also, the demise of the post-Communist teleology overall.

Through workshops, lectures, performances, and panel discussions, Art and Labor after the End of Workinquires into the relationships between creativity, art and labor, and capitalism within this complexification; while concurrently dissecting the notion of post-work society, and its supposed domination by the service economy and creative industries, as an ideological humbug that obfuscates the global division of labor and its imminent hierarchies.

Returning to the conundrum of organization in such a present, this Public Editorial Meeting elaborates on the intellectual, artistic, economic, and political concepts developed through the framework of the FORMER WEST project to ask, among other questions: if precarity, as a means of capital’s further expansion globally, has brought about new forms of class (re)composition at this scale, what might be corresponding forms of organizing and models of solidarity? And thus, in what ways do the difficulties of organizing labor among cultural and art workers through this prism—as well as the intrinsic relations between creativity and precarity—define the contours of the political economy of the “former West,” and in so doing, advance the “formerization” of the West itself?

For full program, as well as video recordings of the Public Editorial Meetings, please visit the FORMER WEST digital platform at: www.formerwest.org.

The Warsaw Public Editorial Meeting has been conceptualized by FORMER WEST editors Boris Buden, Maria Hlavajova, and Simon Sheikh, project researcher and manager Wietske Maas, F/SUW’s Kuba Szreder, and Marta Dziewanska and Sebastian Cichocki of the Museum of Modern Art in Warsaw. It is part of the culminating phase of the project FORMER WEST which unfolds over the course of 2014–2016 through a series of Public Editorial Meetings, leading to the realization of the forthcoming FORMER WEST publication. The series is supported by the Creative Europe Programme of the European Union. FORMER WEST is organized and coordinated by BAK, basis voor actuele kunst, Utrecht. The activities of BAK are made possible by financial support from the City Council of Utrecht and the Ministry of Education, Culture, and Science of the Netherlands.