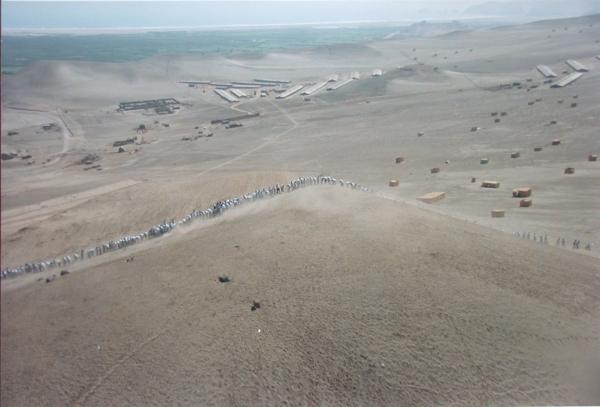 On 13 August 1978 in Ličmany, Slovakia, Július Koller and about 30 children sat on a grass hill together in the formation of a question mark. *U.F.O. stands for Universal-Cultural Futurological Operations. Photo: Kveta Fulier-Ová.

Allegoric Postcard Union is a temporary alliance of artists Francis Alÿs, Július Koller, Roman Signer, and curator Binna Choi. In its current constellation, Allegoric Postcard Union is an interventionist contribution to the exhibition Collective Creativity on view at the Kunsthalle Fridericianum in Kassel from 1 May till 17 July 2005, which investigates collaborative undertakings in contemporary art. Allegoric Postcard Union introduces subtle, unobtrusive manners of working together by means of producing a set of three postcards depicting images by the involved artists and other collaborators, through which they propose their interpretation of the notion of “we,” of “collectivity,” or “being together.”

The three participating artists belong to different generations and work within various cultural contexts. However, to a great extent they share common sensibilities and concerns in their artistic practice and working methods. It could be said that Alÿs, Koller, and Signer engage in creating situations of empowerment in their work, in which an individual could activate the possibilities of liberating him- or herself from a given socio-political formation in order to imagine another construction of collectivity embodied in preserving the singular in heterogenous coexistence. In Jean-Luc Nancy’s terms, this would establish the possibility of being “singular plural.”

The selected images are extracts of the artists’ performative works in collaboration, and as such function as an aesthetic and political abstraction of the moment. Each depicted scene is carefully directed by the respective artists and performed by a group of people in different political topographies: Alÿs’ in Lima, Peru of 2002; Koller’s in Cicmany, Slovakia (former Czechoslovakia) in 1978; and Signer’s in Kassel, Germany in 1987. Despite the fact that a lot could be deciphered about the actual political climate in which these performances took place, the selected images are situated in a natural landscape or on a background seemingly remote from the direct impact of the contexts by which they are informed. In this respect, Alÿs’ ephemerality and subtlety, Koller’s witty and minimalistic humor, and Signer’s abrupt absurdity might be perceived as effective “tools” for dialogue with the audience. They function as a poetic and political condensation of the moment, suggesting multiple associative narratives or “allegories” as an opportunity to deepen the imaginary (or real) potentials of the collectively shared experience and participation.

Allegoric Postcard Union is a temporary alliance and does not predetermine the duration of its existence. Yet the promise of its sustainability resides in the way that the members constantly find possible contexts and practical grounds to produce new postcards.

On 11 April 2002 in Lima, Peru, Francis Alÿs, in collaboration with Cuauhtémoc Medina and Rafael Ortega, asked 500 volunteers to form a single line with shovels in order to displace a 500-meter long sand dune 10 cm from its original position.

On 13 August 1978 in Ličmany, Slovakia, Július Koller and about 30 children sat on a grass hill together in the formation of a question mark. *U.F.O. stands for Universal-Cultural Futurological Operations. Photo: Kveta Fulier-Ová. 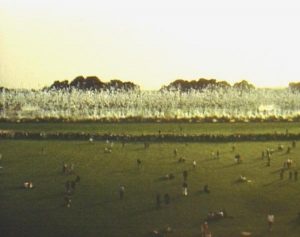 On 20 September 1987 in Kassel, Germany (the last day of Documenta 8), Roman Signer blew up thousands of sheets of paper to create a “wall” of white rain and hundreds of the participants-audience members stood in unity with each other watching the “rain” falling down. Film still: Peter Liechti.