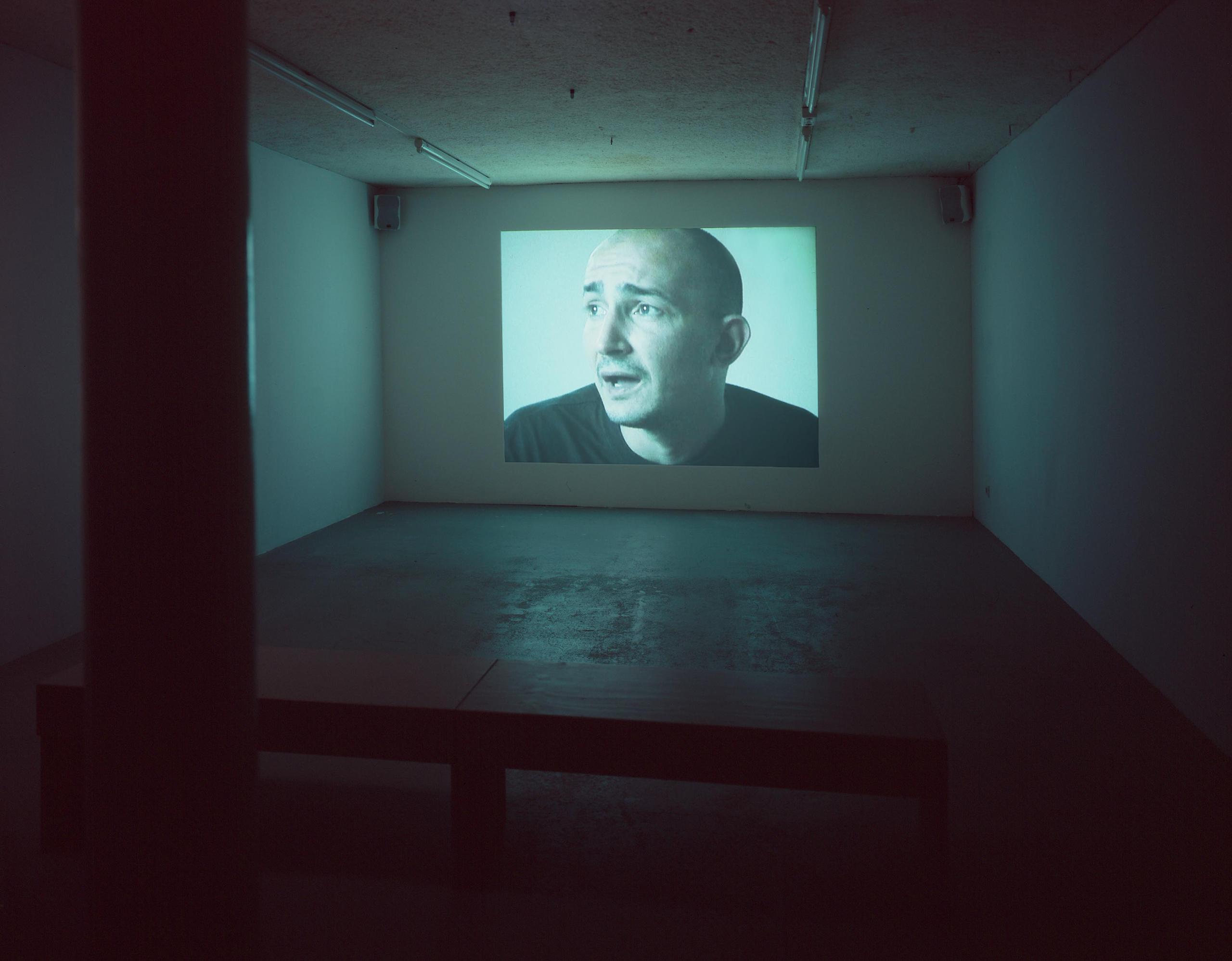 In the work of Adrian Paci (paintings, drawings, photographs, videos, and installations), the social reality of Albania plays a central role. Paci’s work deals with the radical changes of the country since the fall of communism in 1991, and his own experiences as an immigrant. He moves back and forth between the autobiographical, personal story and the larger collective narrative. Paci shows how identity is formed and conditioned by social and political circumstances, and how one attempts to relate to this situation as an individual, a citizen, and an artist.

In the exhibition four video works are presented. In Turn On (2004) Paci shows a group of unemployed men who provide light in the dark streets by using generators. It is a metaphorical film that in a subtle yet critical way addresses contemporary conditions in Albania. In the video Albanian Stories (1997) the artist films his daughter Jolanda reciting fairy tales to her dolls. The story begins like any typical child’s tale, but when actual facts about the conflict situation in Albania emerge from Jolanda’s imaginative narrative, we realize that something more complex is going on. In his most recent video Klodi (2005), Paci deals with the widespread phenomenon of illegal immigration—which we read about in the newspapers every day—making it personal and intimate. In the video Piktori (2002) the artist’s position in society and the notion of art is called into question.

The analysis offered by Paci’s work is imbued with political urgency and emphasizes the profound discrepancies in individual agency, freedom, and opportunity worldwide. His work is a reminder of the fact that our individual possibilities are not just a matter of personal preferences and choices, but rather are molded by broader political and social settings.

Several men sit quietly on the steps of a town square. The camera moves slowly over their faces that express signs of a hard life. Their facial features are marked by deprivation and adversity. The square is located in the Albanian city Shkodër, birthplace of the artist Adrian Paci. The video work is called Turn On (2005).

It is a common phenomenon in Albania for the power to fail at least twice a day. During these blackouts, the people in the city use generators as a provisional solution to light their shops, coffee bars, and houses. The men on the steps are unemployed. They sell their services on the streets. Paci has hired them and placed them here to provide light in the darkness; they are cranking up the generators and holding the light sources in front of them. Their activity is evidence of people rising above the shortcomings of society.

In this video Paci turns an object of necessity, the generator, into a symbol. From the gloominess of unemployment, the endless state of waiting, the generators seem to stand for renewal and hope, while at the same time showing an undertone of irony towards a society marred by deprivation. The sound of the generators is both comforting and penetrating. Time seems to stand still, but the constant flow of energy from the lights symbolizes the changing city. Modernity is infiltrating Albania; its repercussions can be seen in every facet of society.

In the work of Adrian Paci (paintings, drawings, photographs, videos, and installations), the social reality of Albania plays a central role. Paci focuses on the radical shifts that have taken place in the country since the fall of communism in 1991, when it became a democracy for the first time in its history. After the Second World War, Albania fell under the communist dictatorship of Envor Hoxha. Hoxha’s iron policies and ideology were so extreme—he broke in 1961 with the USSR because it was too liberal—that under his thirty-year leadership Albania was one of the most geographically and politically isolated countries on the continent. No opposition of any kind was tolerated and the country was beset by severe poverty. After the elections in the early nineties, the first democratically elected president of Albania, Sali Berisha, opened the doors to international trade. Shortly thereafter the country was awash with economic scandals, giving rise to chaos and discord among the population. The peak of this crisis occurred in 1997, which was marked by a total collapse of the economic-political system. Anarchy reigned throughout the country; riots and plundering broke out. Fearing for the safety of his family, that year Paci decided to move and to start a new life in Milan.

Paci’s work addresses the transformation of Albania and his own experiences as an immigrant. Paci moves back and forth between the autobiographical, personal story and the larger collective narrative. In his video Albanian Stories (1997), made after his arrival in Milan, Paci films his three-year-old daughter Jolanda reciting fairy tales about a cat, a cow, and a rooster to her dolls. The story moved him. Originally trained as a painter, Paci picked up a camera and made his first video work.

The story begins like any typical child’s fairy tale, but when actual facts about the chaos in Albania emerge from Jolanda’s imaginative narrative, we realize that something more complex is going on. The “feel good” sensation we normally get from the naive and captivating way in which a child tells a story dissolves when Jolanda announces the arrival of the “international forces,” who come to save the animals from “the dark forces.” The allusion to the real situation in her homeland is disturbing, its gravity contrasting sharply to Jolanda’s innocence. Memories of the conflict in Albania have been incorporated in her daily existence; facts have turned into fantasy. The child’s perception is both touching and disturbing. It shows the existential ability of people to adapt to extreme circumstances.

Reality is a source of inspiration for Paci. He plays with the notion of fiction and reality, as well as with reality and its representation. In his work he exploits mimesis and cinematography as a strategy, often provoking the question, “Is this real?” In his most recent video Klodi (2005), Paci addresses the widespread phenomenon of illegal immigration—which we read about in the newspapers every day—making it personal and intimate. In the film an Albanian man named Klodi talks for forty minutes, straight into the camera. He speaks about his experiences as an exile and illegal immigrant. Klodi tries to flee his land of origin. He attempts to set his “own” borders, to build up a new life somewhere else where living conditions are better. Like many exiles, he ends up in an endless web of rules and bureaucracy. Again and again he manages to build a life for himself in a country, only to be deported after a couple of years. Despite his many failed attempts, he keeps on trying (in some cases resulting in absurd, almost unbelievable scenes). As a viewer you sympathize with him. But Paci’s style of filming—simple, showing just one single frame of Klodi’s face full-screen—asks a lot of the viewer. He doesn’t present the story in a cinematic or aesthetically “enticing” mode. Paci’s technique emphasizes the hopeless situation and the tenacity with which Klodi keeps pursuing his journey, over and over again.

Klodi’s ultimate dream is America—for him, as for many other immigrants—the land of opportunity where dreams can be realized and everything is possible. Every now and then in the film you see an image of the Statue of Liberty shrouded in clouds. Miss Liberty seems to be within reach but every time—just as the dream is on the verge of being realized—evaporates and disappears before his eyes. She appears visible, palpable, and approachable, but remains distant, cold, and intangible.

At the end of his story, as Klodi finds himself in Albania once more and back to square one (except now he’s got a wife and two children he’s had to leave behind in another country) he calls his existence into question and asks, “So what is my life?!” How is he to understand the purpose of his life if he cannot buck the regulations after all and his life may not be his to create? This ultimate inquiry—the question of the meaning of life—appears as a recurring element in Paci’s work. He shows how identity is formed and conditioned by social and political circumstances, and how one attempts to relate to this situation as an individual, a citizen, and an artist.

In the video Piktori (2002), Paci looks into the artist’s position in society. In the film he shows a painter who rarely makes autonomous work anymore. He has become a forger. He reproduces paintings, falsifies birth certificates, diplomas, death certificates, and ownership papers, and designs shop signs. He has turned into a tradesman who compromises his artistic talent in order to survive. The work is once again a way to relate to the Albanian drama without lapsing into banal tragedy mode. In Piktori, the artist is engulfed by social circumstances. He has become a small-time criminal who finds himself outside the web of the law. When someone asks him for a diploma, he tells him to go home, put on something nice and come back. When the customer returns, dressed in a smart suit, he gives him the document and says, “Now you can become a minister.” This, ironically, seems to be the real power of the artist. His technical skills give his customers the chance to take fate into their own hands and create a better life for themselves. When the painter claims that everything made by the hands of an artist is art, including his own forgeries, the notion of art is called into question.

The analysis offered by Paci’s work is imbued with political urgency and emphasizes the profound discrepancies in individual agency, freedom, and opportunity worldwide. His work is a delicate reminder of the fact that our individual possibilities are not just a matter of personal preferences and choices, but rather are molded by broader political and social settings, often unjust.