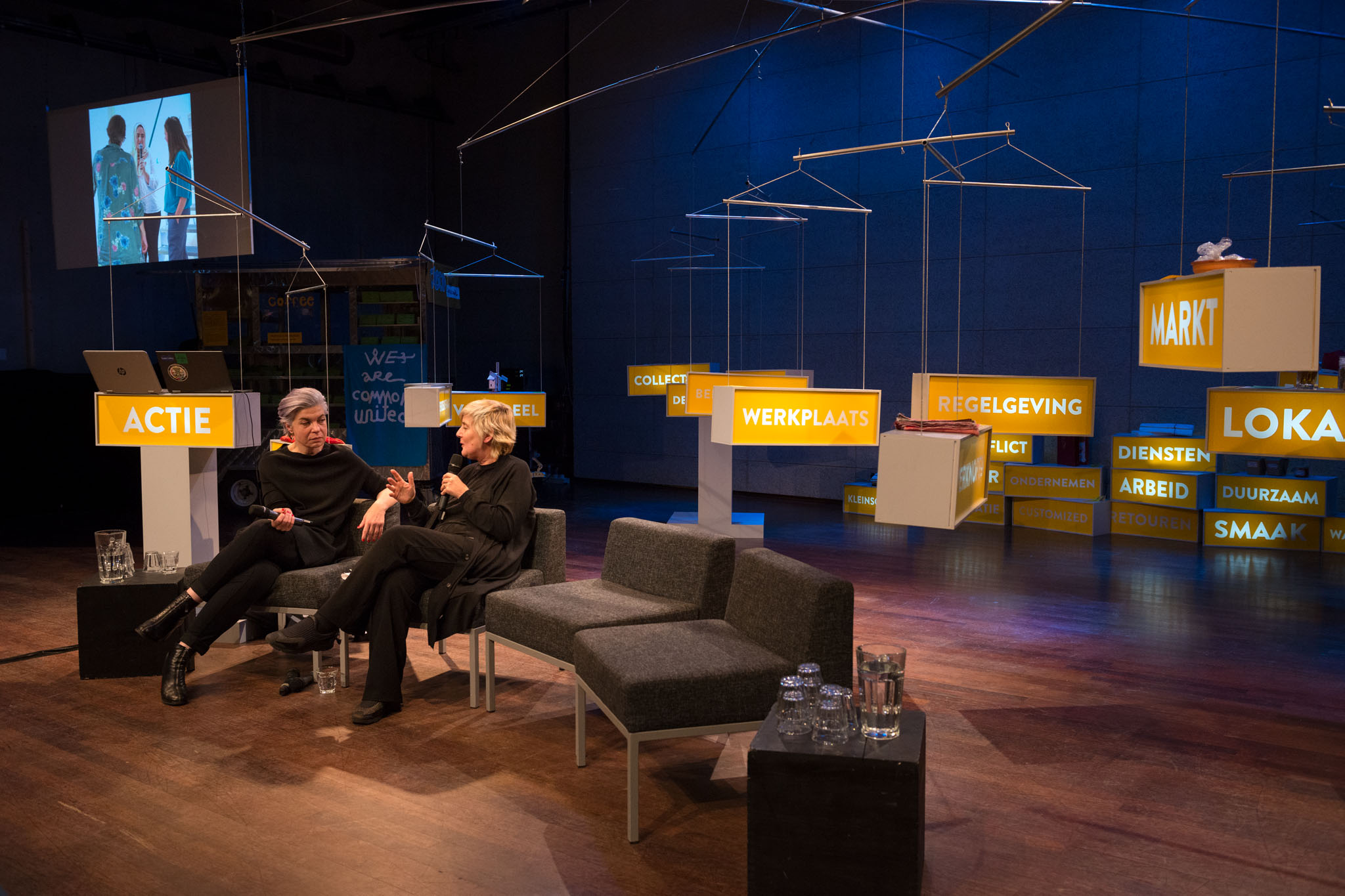 Maria Hlavajova and Jeanne van Heeswijk in conversation as part of Propositions #10: Instituting Otherwise, organized in the framework of Trainings for the Not-Yet (2019–2020) at BAK, basis voor actuele kunst, Utrecht, 7 December 2019. On the right: Mobile of Interdependency (Acts of Balance), 2014, an installation by Jeanne van Heeswijk and Afrikaanderwijk Cooperative, photo: Tom Janssen.

FEINART (The Future of European Independent Art Spaces in a Period of Socially Engaged Art) is a PhD training network funded by the EU, in partnership with several universities and art spaces, amongst which BAK, basis voor actuele kunst, Utrecht. As part of the FEINART Lecture Series, BAK’s general and artistic director Maria Hlavajova presents an online lecture on 3 June 2021, From Art Institution to Community Portal.

In her talk, Hlavajova speaks from within the practice of instituting otherwise at BAK: a process of institution making as a continuous succession of interconnected “instituent” events, driven by the urgencies of the present. Within this process, BAK has evolved as a base where various forms and archives of knowledge—from art to embodied research, theory, lived experience, memory, and social action—converge around the question of how to be together otherwise? From within this composition, and in sync with the imperatives of social, cultural, and ecological justice, there emerges a collective practice of thinking through and reimagining the conditions of the world, and enacting these alternative imaginaries through propositional aesthetico-political experimentation.

With a focus on relation, collectivity, and coalitionality, such an understanding of institutional practice involves steering away from (western-modern) conventions premised on disinterested spectatorship, expert culture, disciplinary divisions, and representation, among others. It similarly avoids the (colonial-acquisitive) paternalist, instrumentalizing, and depoliticizing attitudes toward communities that customarily prevail across much of the art world in the global north. How can an art institution circumnavigate these sticky tropes so that a form of solidarity with its community can emerge to guide its institutional work? One that nonetheless recognizes that the art institution is always already implicated in the production of inequalities and disenfranchisement? One that respects that the community exists as a body of relations decidedly distinct from this institutional establishment? What forms of being together otherwise can be practiced in and with the cultural institution to come?

Driven by these concerns, BAK is collaboratively rethinking the art institution into a community portal. A porous gateway out of (and back into) the “normal order of things” of current conjuncture, the portal is what disrupts the spatial and temporal politics of this “normalcy” to open a (momentary) possibility to leave its unfreedoms behind, mobilizing unforeseen forms of encounters and otherwise improbable political subjectivities. Understanding such encounters as instances of collective anticipatory learning for and of the not-yet, here is where alternatives to today’s realities can be prefigured, rehearsed, and lived—as if it were possible.

As these processes are underway, the talk consists of tentative notes from BAK’s collaborative work and ongoing conversations. It further draws on knowledges from BAK’s ongoing research itinerary Propositions for Non-Fascist Living (2017-ongoing), and in particular the project Trainings for the Not-Yet, 2019/2020, co-convened with artist Jeanne van Heeswijk, as well as a continuing exchange with BAK’s 2020 Fellows.

Registration
This lecture is organized by the FEINART network and can be attended free of charge via registration through Eventbrite, sign up via this link.