Since 2017, BAK conducts a post-academic program in the form of the BAK Fellowship, offering ten research positions per year (September–June) to Netherlands and internationally based practitioners involved in contemporary arts, theory, and activisms. The Fellowship Program develops talent and critical practice in concert with the public experimental projects of BAK, advancing the notion of art as a public sphere and a political space. The BAK Fellowships is low-residential, with possible residency accommodation for one practitioner otherwise unable to travel back and forth for meetings due to political conditions and/or incommensurable circumstances. The Fellows regularly gather at BAK for intensive, collective seminars and workshops with visiting artists, scholars, and other cultural practitioners.

Luigi Coppola is an artist who works in performance, video, and public art.

Pelin Tan is a sociologist and art historian.

Matthijs de Bruijne’s practice is a result of being in political collaboration with trade unions and labor organizations.

Ola Hassanain is an artist with degrees in architecture, cultural identity, and globalization.

Sepake Angiama is a curator and educator interested in discursive practices.

Quinsy Gario is a visual and performance artist from the Dutch Caribbean.

Otobong Nkanga’s practice explores the social and topographical changes of her environment.


Warning: Invalid argument supplied for foreach() in /var/www/clients/client40/web1615/web/wp-content/themes/bak/template-parts/archive/post-fellow.php on line 17 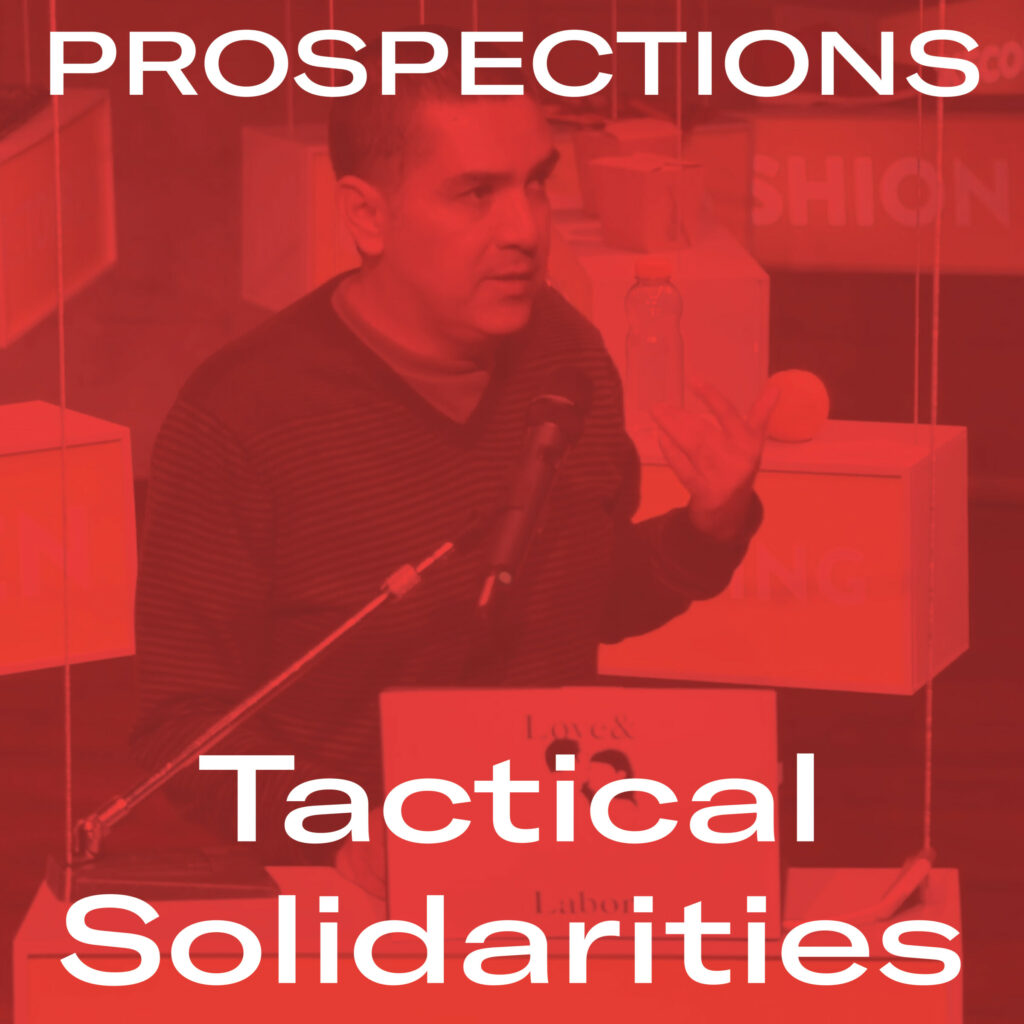 Have you checked out BAK’s online publishing platform Prospections? Along with many other practitioners at the intersection of art, theory, and social action, several Fellows have been and continue to contribute to the platform. Prospections centers propositional and anticipatory intervention, documentation, research, and discourse; for instance with general themes of Tactical Solidarity and How to […] 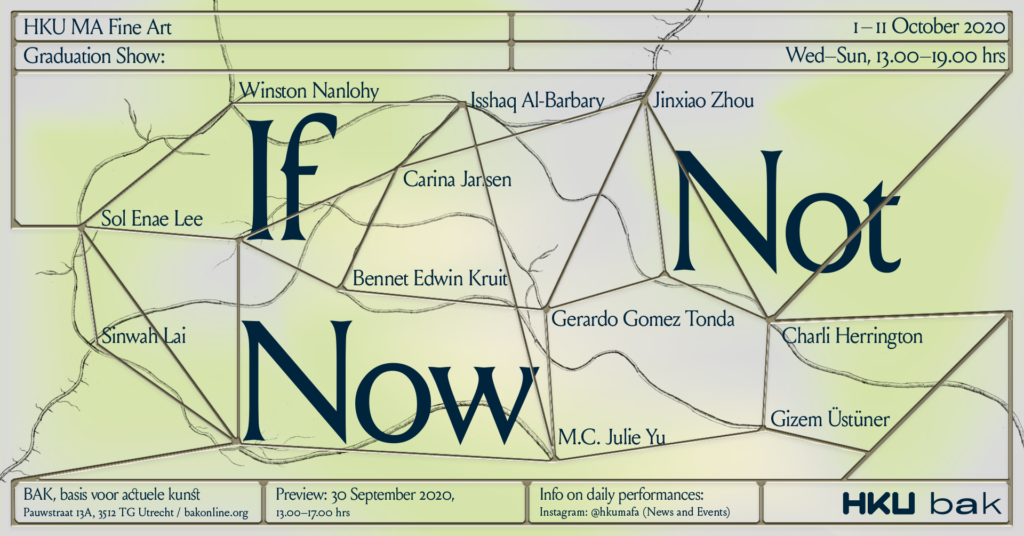 BAK Fellows in MaHKU Graduation Show: If Not Now

Several generations of Fellows are involved in this year’s MaHKU, Utrecht, graduation show If Not Now, taking place at BAK from 30 September–11 October 2020. One BAK 2020 Fellowship position has been awarded to the Mutual Support Platform (MSP), a space for conversations and actions by/between/for students, alumni, and teachers of the MAFA HKU, Utrecht. […] 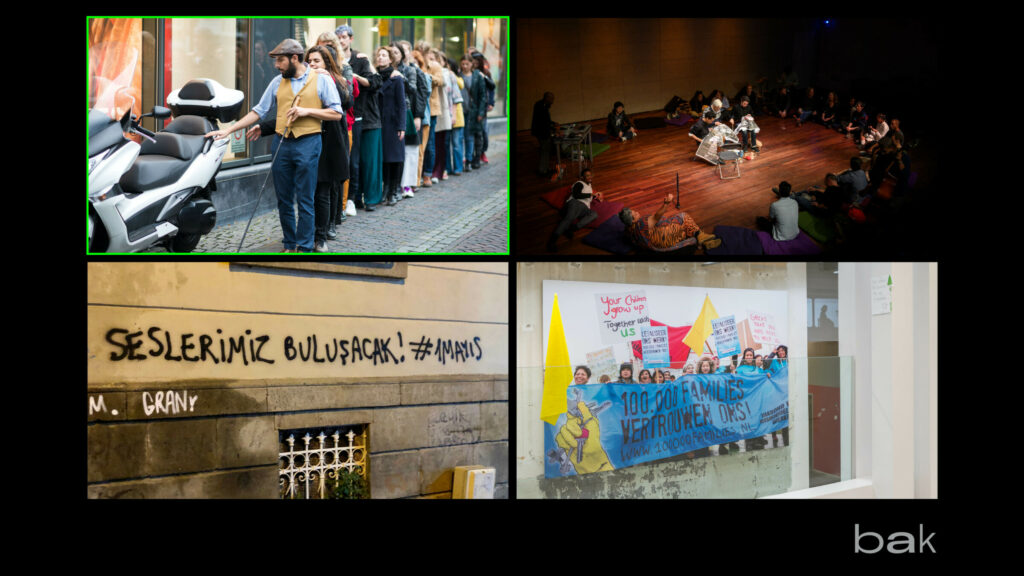 BAK 2017/2018 Fellow Isshaq Al-Barbary and 2019/2020 Fellow Joy Mariama Smith are among the contributors to BAK’s Public Studies Program How to Assemble Now, taking place In August and September 2020.   Read more about the program here. 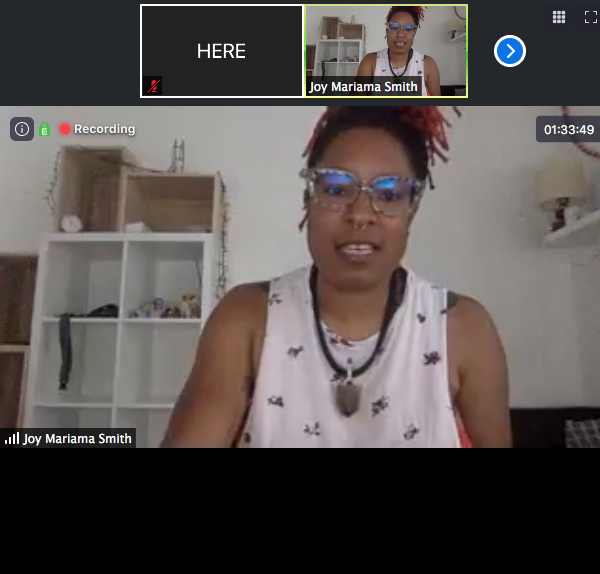 A Conversation on: The Power of Doing Nothing

BAK 2019/2020 Fellow Joy Mariama Smith and BAK 2017/2018 BAK Fellow Quinsy Gario join Framer Framed for A Conversation on: The Power of Doing Nothing (2020), a radio program discussing productivity, refusal, and the racialized inequalities of rest. 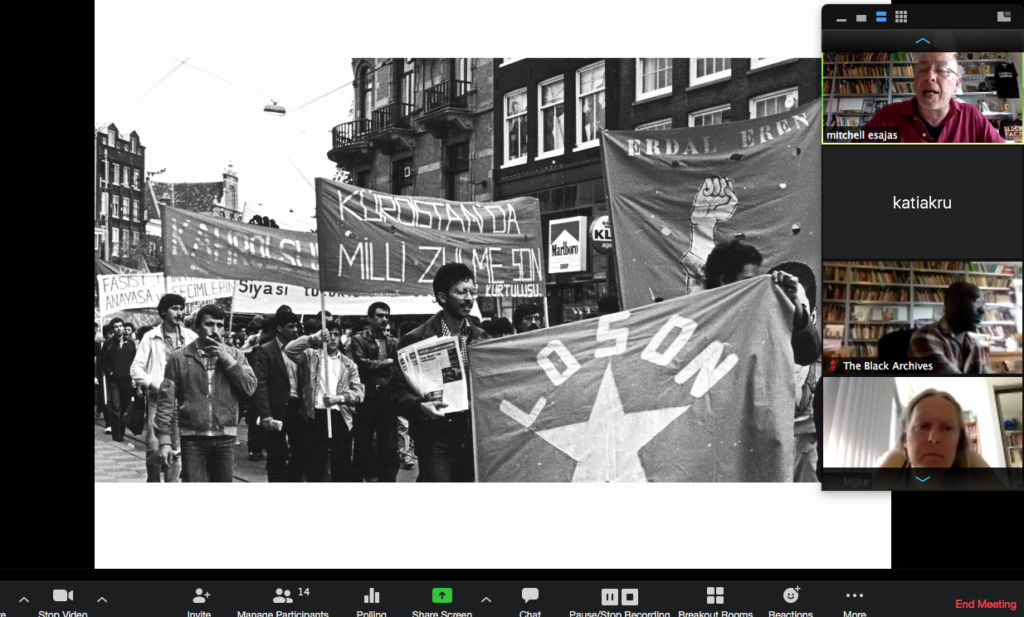 Fellows Mitchell Esajas, Grant Watson, and Reem Shilleh, along with BAK, were preparing to co-convene a Fellows Intensive beginning 23 March, 2020. With lockdowns starting in Europe just a week before, the plans became impossible in their imagined forms and the Fellows were unable to gather at BAK, visit The Black Archives in Amsterdam, do […] 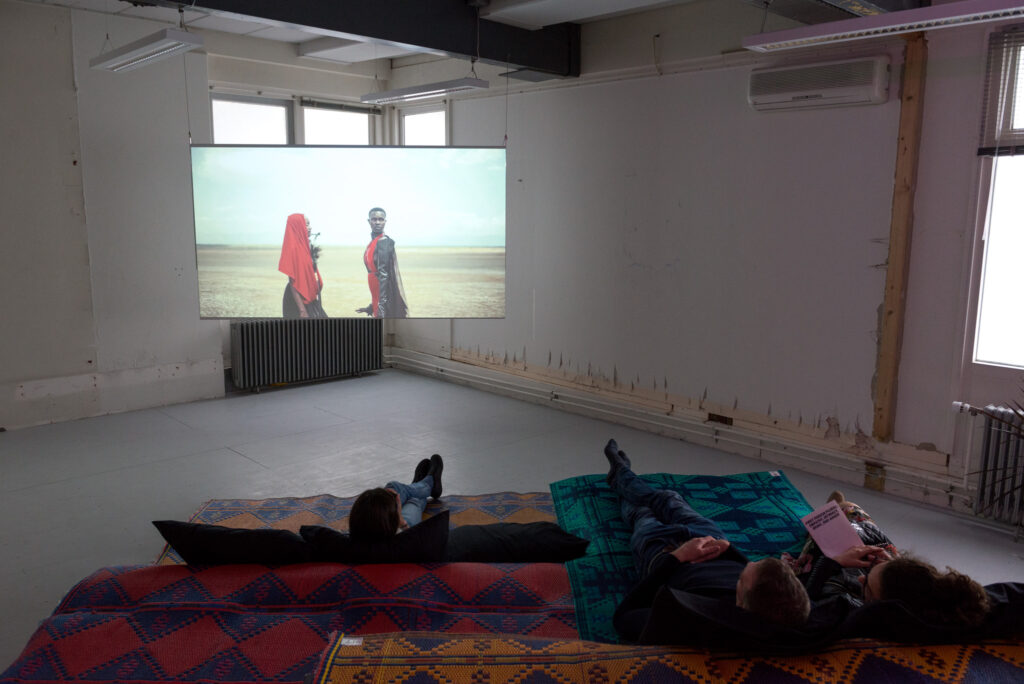 BAK 2017/2018 Fellow Sepake Angiama co-curates the 2019 Chicago Architecture Biennial …And Other Such Stories.  As part of the program, Fellow 2017/2018 BAK Fellows Ola Hassanain’s work was part of the exhibition. From the curators’ statement: “Titled …and other such stories, the 2019 Chicago Architecture Biennial is rooted in close readings of the spatial realities of its […] 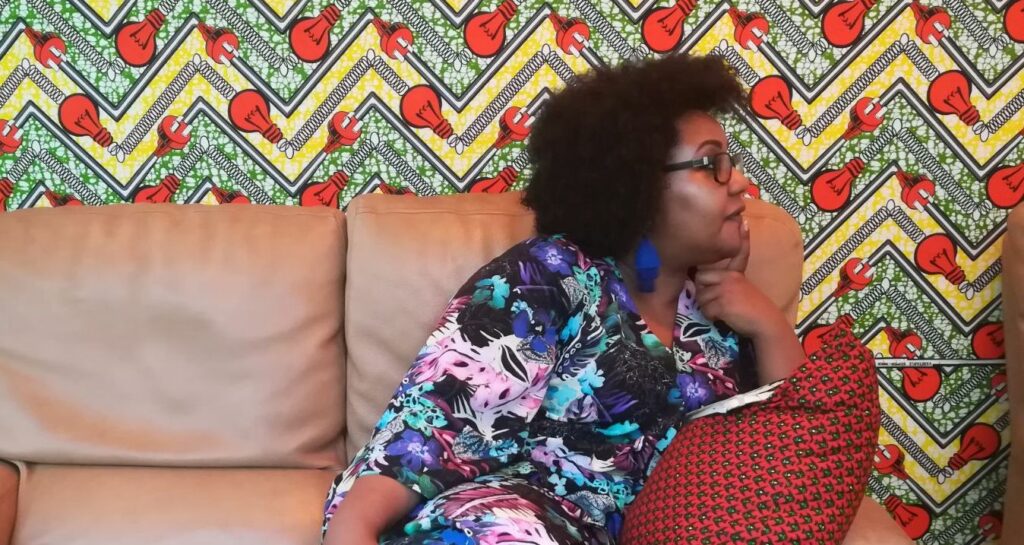 BAK 2017/2018 Fellow Ola Hassanain was awarded a 2019/2020 Paulo Cunha e Silva Art Prize, and has work in the Sharjah Architecture Triennial Rights of Future Generations (2019–2020) and Chicago Architecture Biennial …And Other Such Stories (2019–2020) curated by Fellow BAK 2017/2018 Fellow Sepake Angiama. Congratulations to Ola on the opportunities! 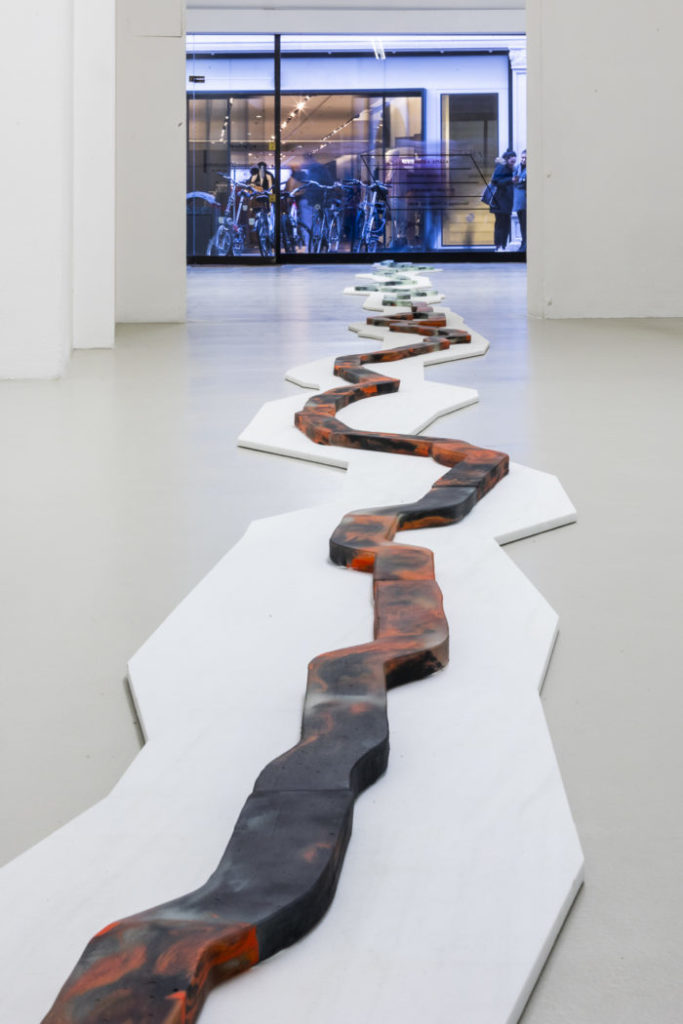 Mention for May you live in interesting times 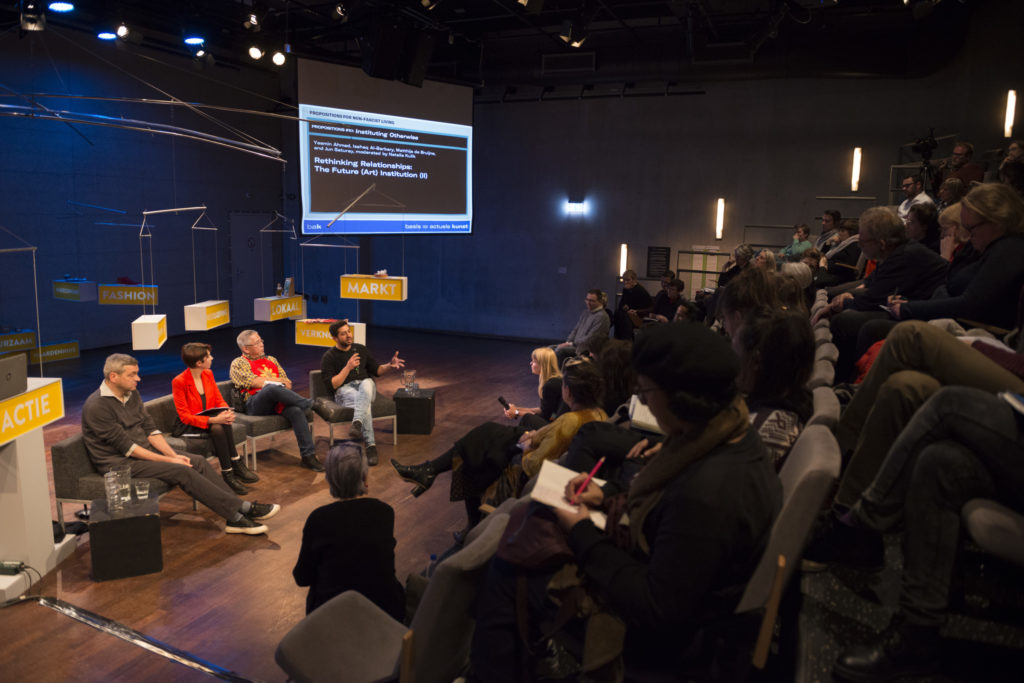 BAK 2017/2018 Fellows Isshaq Al-Barbary and Matthijs de Bruijne, as well as 2018/2019 Fellow Jeanne van Heeswijk and 2019/2020 Fellow Mitchell Esajas presented and engaged in training and discussion as part of BAK’s program Propositions #9: Instituting Otherwise on 7 December 2019 at BAK, probing the question of how to institute spaces for art in […] 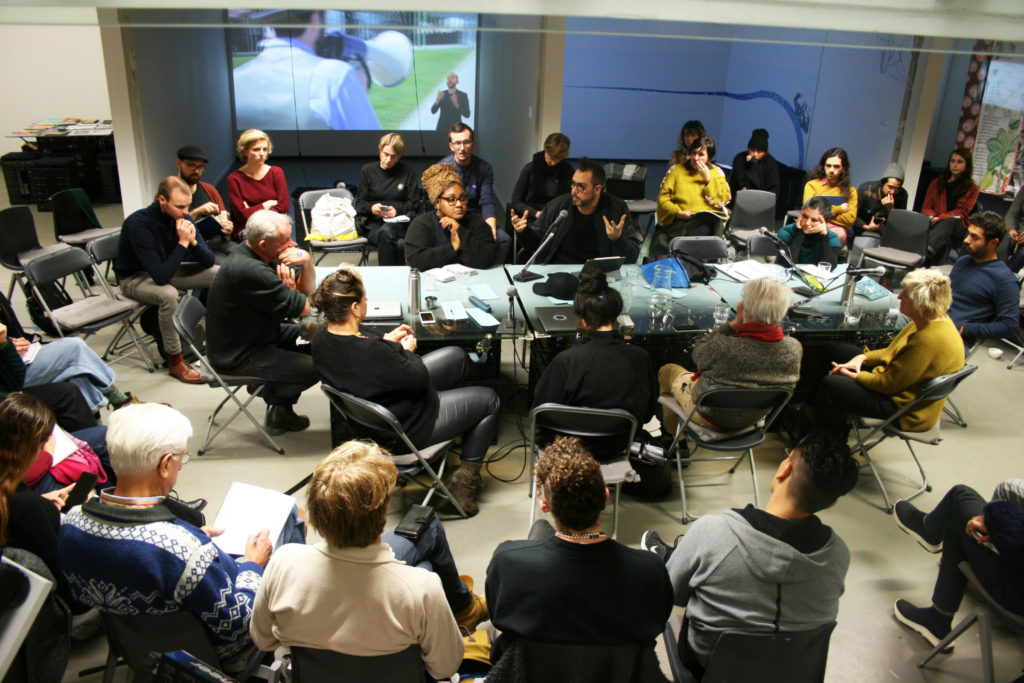 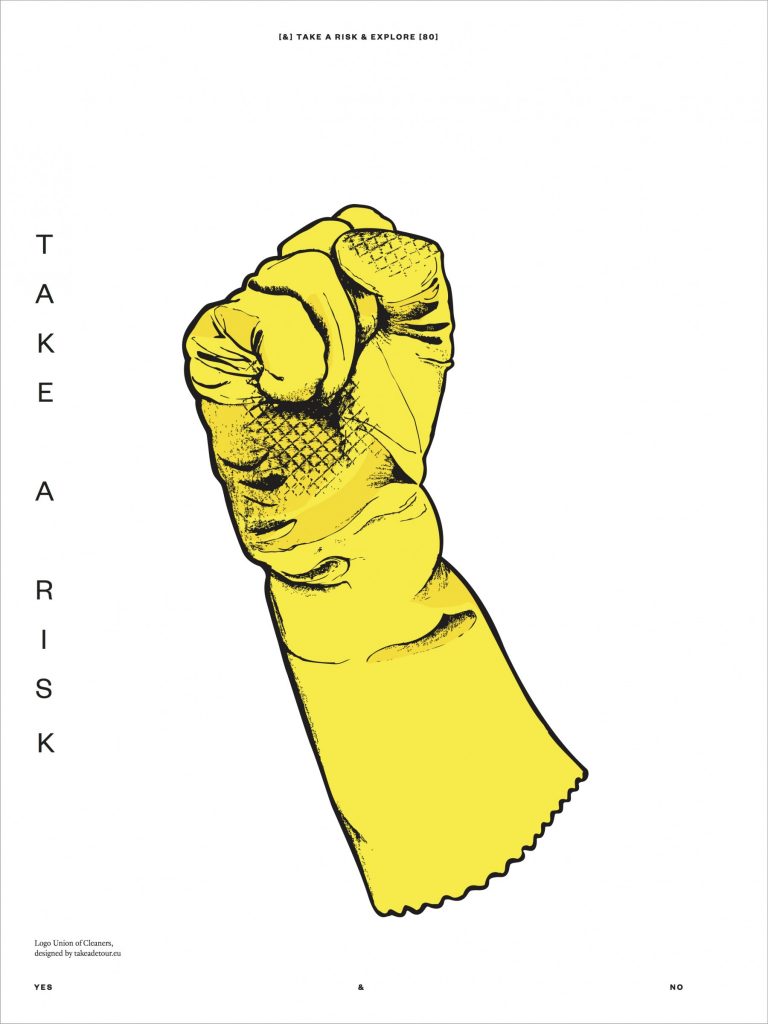 Take a Risk and Explore: The Visualisation of the Dutch Cleaners’ Movement

Excerpt from the article: On a summer’s day in 2011 a large group of workers gathered at the entrance of the headquarters of the Federation of the Dutch Trade Unions (FNV) in Amsterdam. The workers, all FNV members, were there to show their dissatisfaction with the negotiations for a new general pension agreement. It had […] 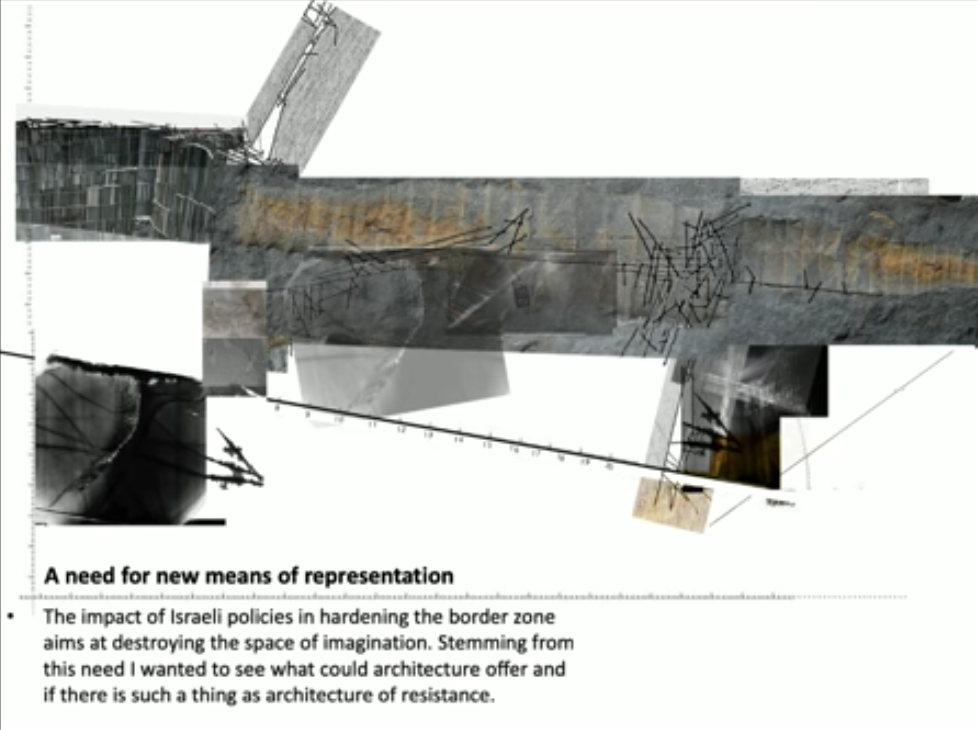 As part of a session convened and moderated by 2017/2018 BAK Fellow Ola Hassanain, Yara Sharif gave a seminar (via Skype), discussing, in particular her text  “Cultivating spatial possibilities in Palestine: searching for sub/urban bridges in Beit Iksa, Jerusalem” (by Nasser Golzari and Yara Sharif); and more generally unpacking alternative means to re-read and redraw […] 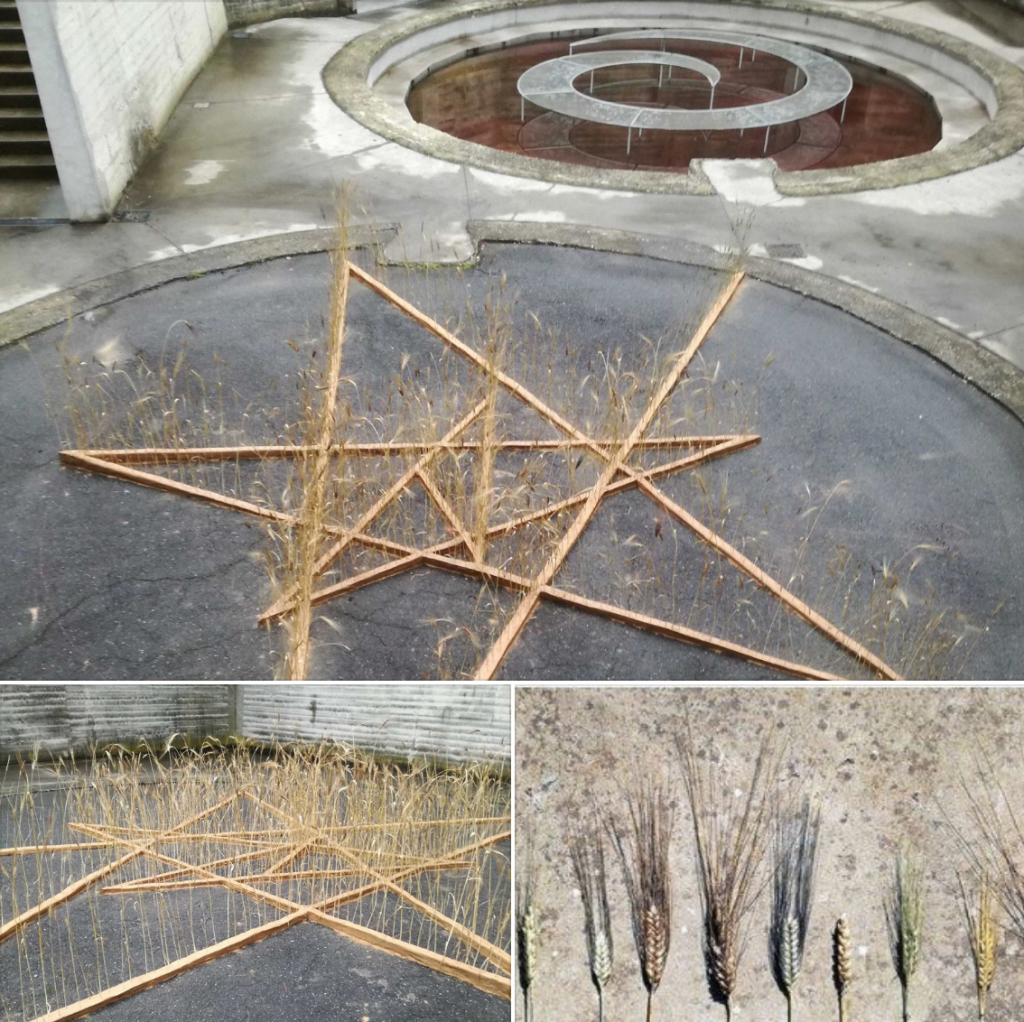 Evolutionary Populations: Seeds of a World Waiting to Germinate

With the outbreak of civil war in Syria in 2011, agronomist and phyto-geneticist, Salvatore Ceccarelli was forced to end his 25-year research period in Syria where he had been working with local farmers experimenting with a revolutionary agricultural method that develops participatory plant breeding, a type of breeding done in collaboration with farmers to breed […] 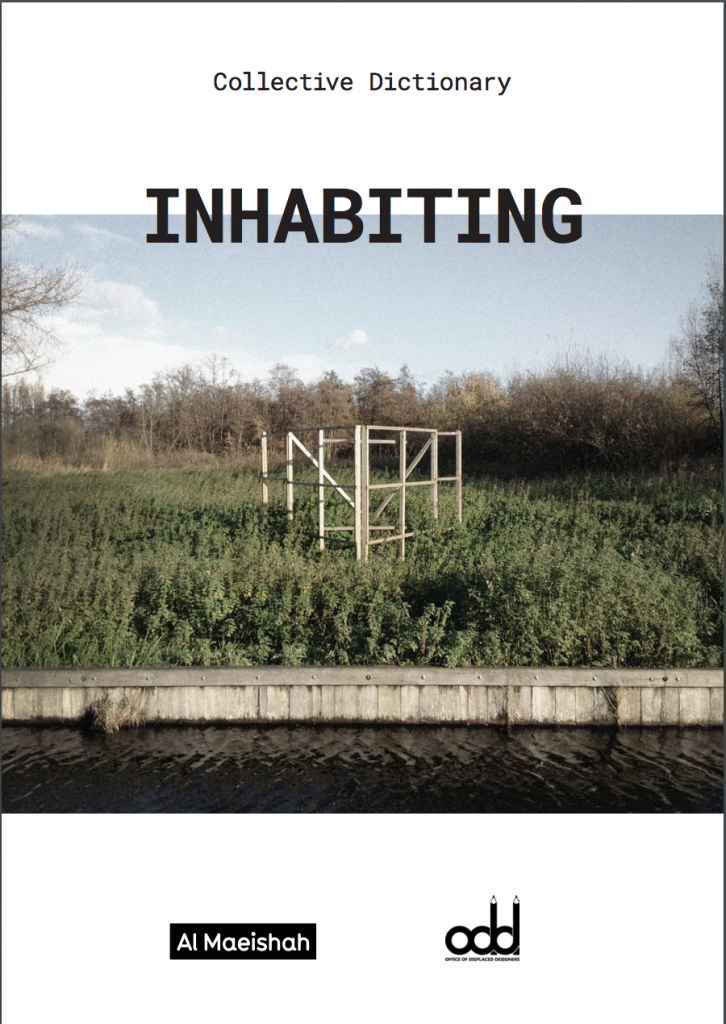 Inhabiting is an outcome of the collaboration between Al Maeishah (Isshaq Al-Babrbary, Elena Isayev, and Diego Segatto) and the Office of Displaced Designers (ODD), who invited Al Maeishah to implement their research on The Alternative Atlas of Lesvos: An Island for the World. The atlas aims to intersect with those forcibly displaced, with the global web […] 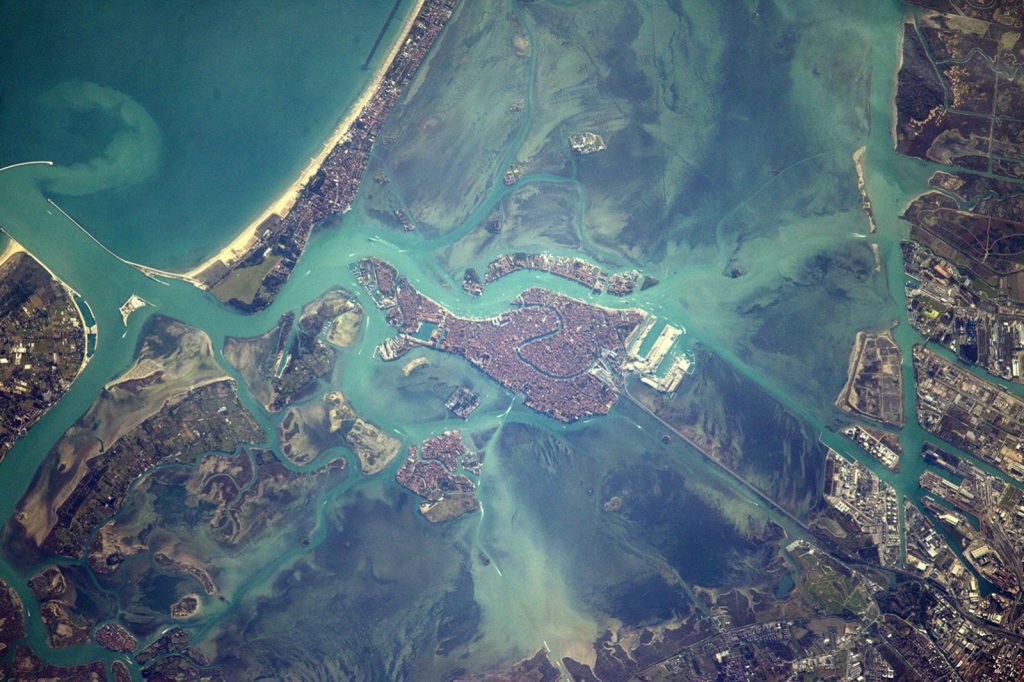 The Architecture of Entanglement Ontology

During  the Venice Biennale of Architecture 2018, The Swamp School will function as a changing, flexible, open-ended infrastructure that supports experiments in design, pedagogy and artistic intelligence. Invited designers and scholars, including BAK Fellow 2017/2018 Pelin Tan, will conduct performative lectures and lead workshops for participants and visitors to the Biennale. On Saturday 26 May 2018, Pelin […] Political scientist, historian, and feminist Françoise Vergès joins the discussion via Skype on how artistic research can contribute to decolonial methodologies. With introduction by Olivier Bouin (director of the Network of French Institutes for Advanced Studies) and 2017/2018 BAK Fellow Pelin Tan. 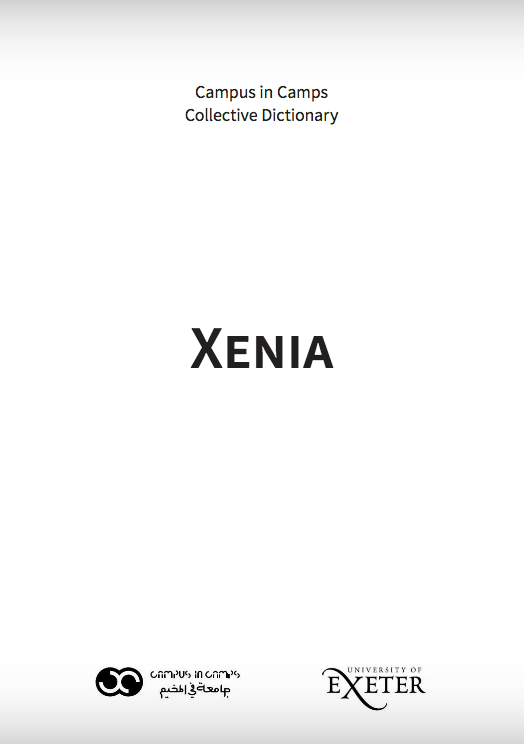 Elena Isayev is a historian and professor at University of Exeter uses the ancient Mediterranean to explore migration, belonging, displacement and spatial perception. Her research is based on the intersection of Hospitality and Asylum, Potency of Displaced Agency, Common and Public Space. Her interdisciplinary and inter-practice approach has led to collective learning and research beyond the […] To Dig A Hole That Collapses Again

A survey exhibition of Otobong Nkanga’s works is presented for the first time in the US. The exhibition titled To Dig A Hole That Collapses Again opens at the Museum of Contemporary Art (MCA), Chicago from 31 March–9 September 2018.

Wendelien van Oldenborgh visited Japan in late 2017 to participate in “MOT Satellite 2017 Fall – Connecting Scapes,” organized at various locations by the Museum of Contemporary Art Tokyo. Her work was exhibited at the Arts and Science Lab at Tokyo University of the Arts Ueno Campus, where she also held a screening and talk […] 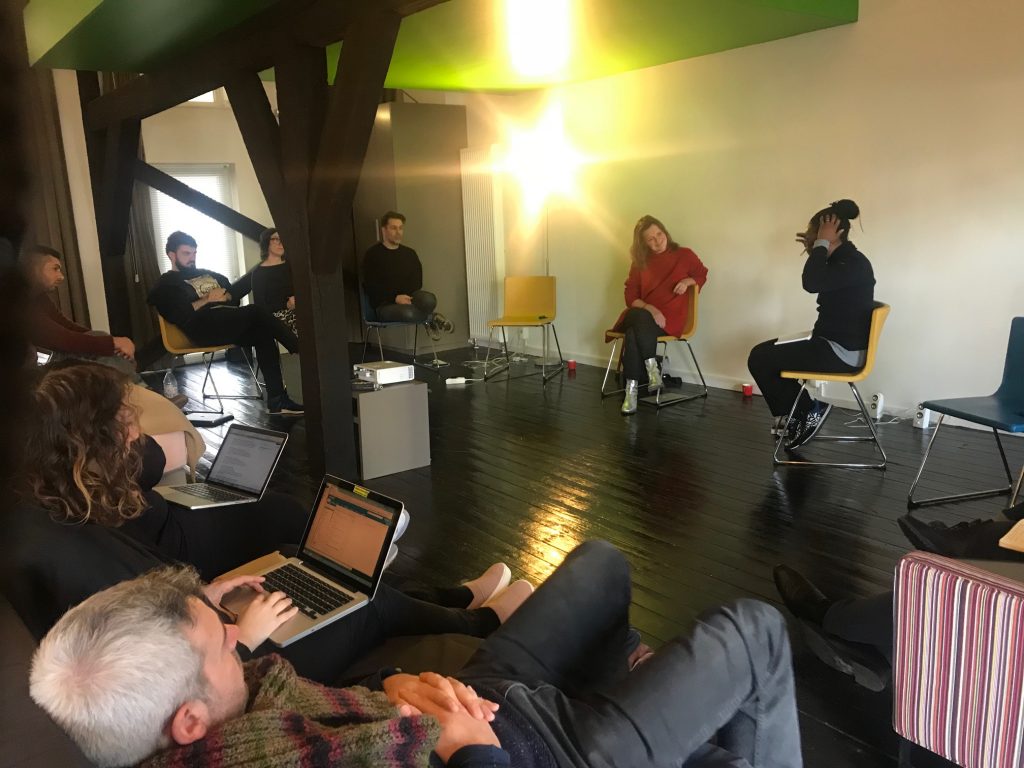 As part of a session convened by 2017/2018 BAK Fellow Otobong Nkanga, educator and political organizer in the arts Andrea Phillips gave a seminar on her current research focus: reorienting contemporary art’s ecology toward producing more emancipatory forms of sharing—not simply about spatial sharing and inclusivity, but also at the level of wage labor.   […]

All Good Things Must Begin: A Conversation Between Audre Lorde and Octavia E. Butler

“All Good Things Must Begin: A conversation between Audre Lorde and Octavia E. Butler” took place at SBC Gallery of Contemporary Art, Montreal, as a space for reading, writing, screening, reflection, and conversation on intersectional feminism, modernist architecture, and science fiction, and forms part of Sepake Angiama’s BAK Fellowship research Her Imaginary. https://www.sbcgallery.ca/sepake-angiama In April 2016, BAK, basis voor actuele kunst, brought to life the Here We Are Academy: a spirited temporary recomposition of a refugee-initiated platform for learning called We Are Here Academy. Established in Amsterdam in 2012, We Are Here is the first large-scale organization of refugees living in limbo in the Netherlands. Through projects organized […] Cinema Olanda at The Black Archives

On 26 November 2017, one day after the opening of the exhibition Black and Revolutionary: The Story of Hermina and Otto Huiswoud, the Amsterdam premiere of Cinema Olanda (2017) took place at Vereniging Ons Suriname and The Black Archives. The film has been part of the installation Cinema Olanda, made by the artist Wendelien van Oldenborgh […] 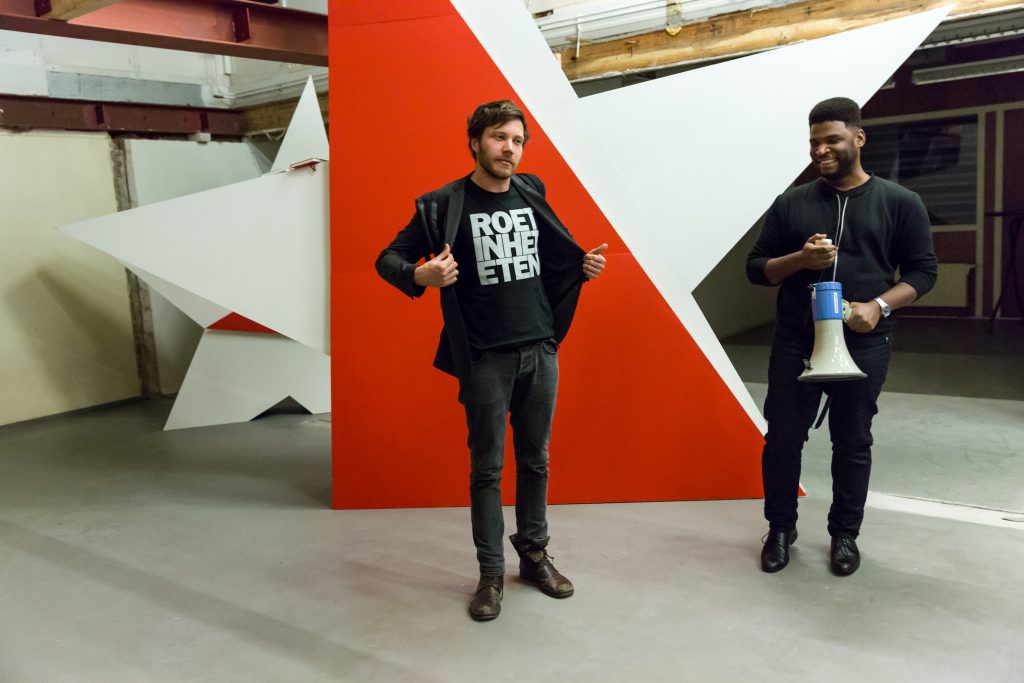 As part of Propositions #2: Assemblism, Quinsy Gario presents his new book Roet in het Eten [Spanner in the Works],an anthology of newspaper columns, opinion articles, blog posts on among other things anti-racism, white supremacy and Dutch media landscape written between 2011–2017 and published mainly on the eponymous online platform Roet in het Eten. As part of the Fellowship weekly intensive in November 2017, Fellow Luigi Coppola convenes a number of discussions including a seminar with lecturer and researcher Shela Sheikh on 24 November 2017 to talk about colonialism, cultivation and nonhuman witnessing and resistance to the colonial mode of organizing, appropriating and extracting value. In the afternoon session […] Suely Rolnik: The Spheres of Insurrection

As part of the Fellowship program in November 2017, Wendelien van Oldenborgh convenes and moderates a (Skype) seminar with psychoanalyst, cultural critic, and curator Suely Rolnik. During this seminar, Rolnik discusses her text ”The Spheres of Insurrection: Suggestions for Combatting the Pimping of life” and how microspheric modes of existence are capable of interrupting the […]

Elizabeth A. Povinelli gives a seminar on the four axioms of critical theory during the first Fellowship 2017/2018 gathering on 6 October 2017.