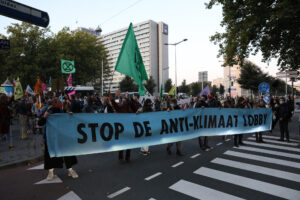 Extinction Rebellion (XR) entered the spotlight in late 2018 with a call for mass disruptions, followed by a first wave of actions which saw thousands come together to block major bridges in London. Borrowing from the history of civil disobedience and breaking some new ground in its tactics and aesthetics, XR attracted a following and level of media attention previously unattainable for grassroots environmental organizing. […]

Copy and paste this URL into your WordPress site to embed

Copy and paste this code into your site to embed