“The Hauntologists” is activated here as a Prospections focus—featuring both commissioned and archival material that has emerged out of the BAK Fellowship for Situated Practice 2021/2022 program. It includes new texts, archival resources, interviews and other research-artistic contributions that bring together the Fellow’s practices in resonance with pivotal concepts at BAK, including voices and ideas generated through the exhibition and gatherings program, as well as strands that dialogue with the “Spectral Infrastructure” focus (also featured on Prospections) led by freethought collective. “The Hauntologists” launch takes place intermittently throughout the duration of eponymous experimental and collective research project in the fall of 2022 and beyond.

Alongside the Zoning Play Complex, Zone Collective also contributes the “Notes from the table. A Not Yet Manifesto” to BAK’s Prospections online forum, which outlines the tenets of their collective annotation methodology, as well as their commitments to workshopping as a form of knowledge production otherwise.

On Digital Discomfort provides in-depth reflections upon and suggestions about what it means to be technologically engaged in the complex realities of the mundane. Across several literary forms—essays, interviews, poetic video experiments, and collective annotations—it seeks to extend these conversations to intersecting fields of study. It does so through undertaking quotidian but attentive experiments to study the potential necessity for opacity, non-eurowhite calculation genealogies, trans*feminist infrastructural entanglements, anti-extractivist connecting cultures, and intersectional notions of hosting and hostility. The urgency for digital discomfort is produced by the contemporary stage of rampant monocultural digitization based on logics of coercion, quantification, and the capture-of-all aspects of more-than-human existence that emerge from ecosystemic and infrastructural arrangements: cloud-computing, hyper-availability, agile flow-management, optimized planetary computing, and so forth. Digital discomfort, like physical discomfort, can come from a politicized re-arrangement of an environment to allow for reimaginations of everyday technological engagements. Reimagining this means focusing on the experiences, aesthetics, and vernacular diversity of techniques as a way to problematize the calcified subjectivity of the computer user or the fairy tales of telecom companies, and to add, twist, or abolish worldviews while reshuffling activist tactics in relation to computational techno-ecologies. As artist and scholar Romi Ron Morrison puts it: “today . . . is not a time of futility but of radical reimagining and visceral reconnection.”

This contribution is a transcription of Dubravka Sekulić’s conversation with Merve Bedir included in the installation Montecarlo, Learning Structures and Bedtime Stories for the Non-Aligned. In it, Sekulić is prompted to react to different questions and topics that seek to intersect multiple perspectives and experiences that collectively draw “another end of the world.” Seeking to advance concrete forms of knowledge and action that pave the grounds for global solidarity against neoliberal governance, oppression, polarization, and conflict, and inspired by the Non-Aligned Movement (1961–ongoing), the text discusses multiple unsettled dialectics between notions of home and diaspora, of resistance or abolition, and of being neither settler nor native. It aims to speculate and propose an agenda of interdependent struggles for a coalition of nonaligned workers.

Composed as part of the Spectral Infrastructure research trajectory, “Beyond Value” is a digital research notebook consisting of a multimedia assemblage of interviews, texts, and visual and sound materials around mining. It articulates a reflection on spectrality and its material manifestations, departing from Ferreira da Silva’s raw materialist approach and Mollona’s notion of “spectral labor.” Striving to develop both an anticolonial critique of extractivism as much as a proposition about spectral value, this editorial is intended as a gathering of matter that resists containment and capture through a visual grammar that takes opacity and hapticality as its starting point. With a fragmentary format and a “quick and dirty aesthetics,” this visual notebook revolves around the Katanga Mining complex operating in the Democratic Republic of the Congo, the world’s biggest producers of cobalt. Cobalt is a central component that underpins the transition to renewable energy that is associated with green capitalism, and hence, it is the raw material for contemporary extractivism and primitive accumulation.

Borrowing its title from Theresa Hak Kyung Cha’s little-known performance and installation Barren Cave Mute, and in line with Yen Noh’s study group In Between Seances, Noh’s text contribution “Barren Cave Mute bears” witness to the materiality of language in Cha’s Dictee (1982), looking into the novel’s linguistic and material displacements in terms of sonic ecologies. It is grounded in Noh’s reading of Dictee, which aims to reveal the silence inherent in the bodily trials of living.

Protected: A Pluriverse of Local Worlds: A Review of Computing within Limits—Related Terminology and Practices Notes from the Table. A Not-Yet Manifesto 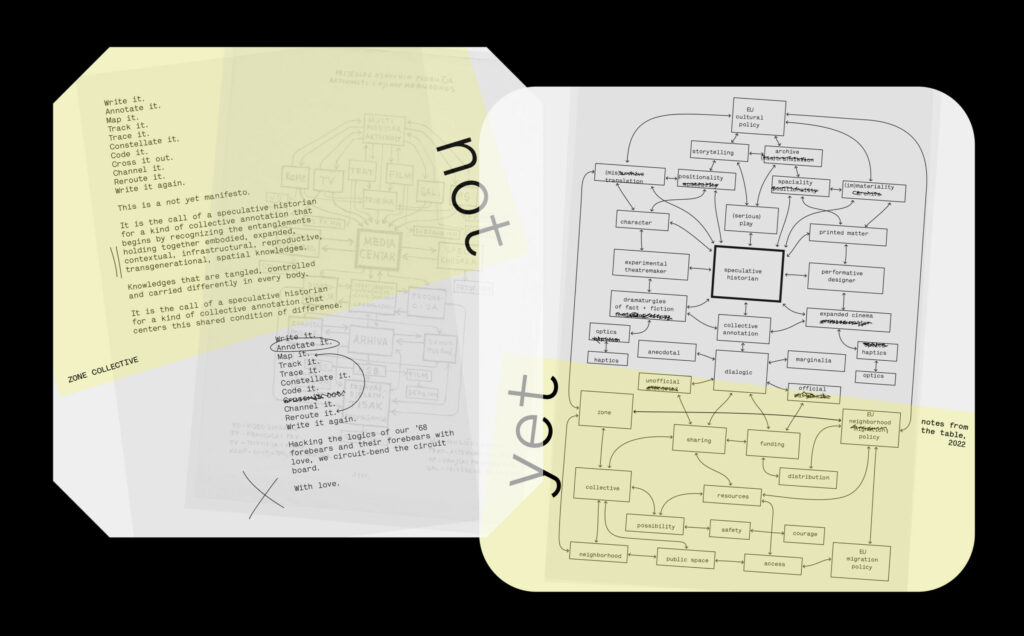