In the Stomach of the Predators 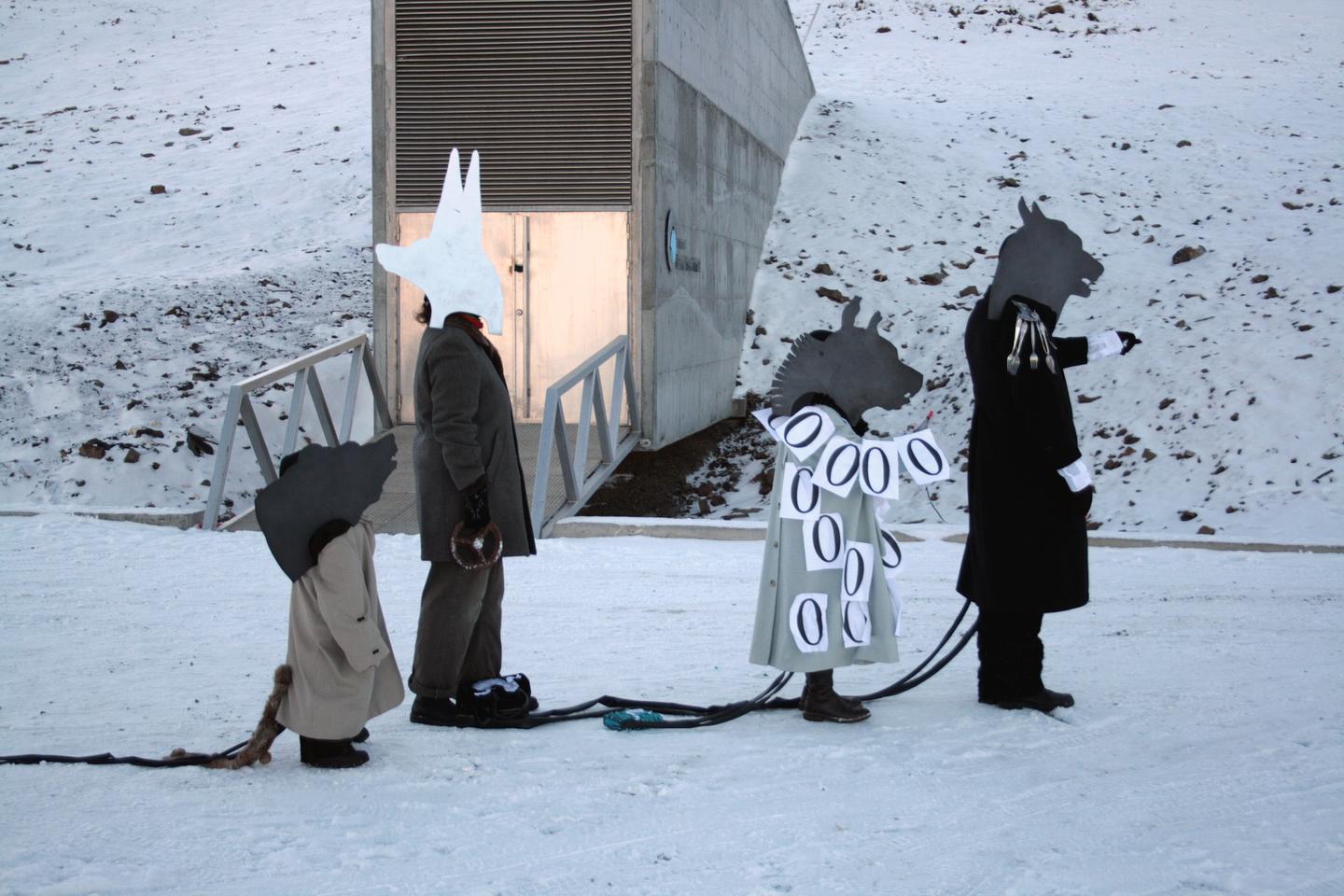 In the Stomach of the Predators, a two-part exhibition by Berlin-based artists, curators, and theorists Alice Creischer and Andreas Siekmann, explores the predatory logic of advanced capitalism. Stemming from their joint research in the last several years concerning the privatization of the commons through the cases of seeds, land rights, and intellectual property, these two distinct bodies of work employ the methods and languages of theatrical and filmic stagings (Creischer) and pictorial tableaux (Siekmann).

The installation of Siekmann takes us to the Norwegian island of Spitsbergen where the Svalbard Global Seed Vault, a project set up to “protect” all existing agricultural kernels in the world from eventual extinction, is based. We learn, however, that the seed bank is financed by the very same corporate lobbies that exercise interests and practices that threaten crop diversity, including, among others, genetic manipulation. These entangled complicities are uncovered through large movable panels with pictograms, reminiscent of the vocabulary developed by science philosopher and political economist Otto Neurath in cooperation with artist Gerd Arntz, who was a part of an anarcho-syndicalist movement in the 1920s in Cologne and Berlin, developing graphic icons specifically for proletarian agitations. The ordered, systematic, and meticulously structured succession of signs, symbols, and their visualized interconnections draw an alarming relational map of the economic and political aspects of biodiversity’s transfer into private hands that so accurately defines our global present.

Creischer’s work contains a cast of a number of whimsical, symbolically charged animal figures—the wolf, the hyena, the bear, and the jackal—each of them representative of a particular form of monopolization of what once was the common good. The animals are sent on a journey from Spitsbergen to Benin and Istanbul, during which they encounter situations that seem absurd and at times outright grotesque. Such surreal scenes are continuously stabilized, however, by an undercurrent of real gravity as the characters delve into the disquieting workings of the neoliberal condition. The creatures are emblematic of, and personify, acquisitive greed paired with injustice and devastation; through them multiple scripts unfold, delivered in a variety of vernaculars, at once resembling the Chaplinian slapstick handlings of despair and the theatrical experimentations of Bertolt Brecht. While addressing the apocalyptic questions of global gene pool heritage, land grabbing, the devastation of natural resources, and the fantastical “science” of financial speculation, art itself—and its possibility to counter systemic violence of such amplitude—is not spared questioning. Though the work tests art’s subversive potential, its complacency in the face of the flows of capital surfaces at least as often as the paradoxical meaning of survival in an era of human-engineered catastrophes.

In the Stomach of the Predators is presented as part of the year-long research into the notion of “survival” within the long-term series Future Vocabularies (2014–2016). The series inquires into the possibility of art to offer a space for developing a variety of itineraries for envisioning another future.