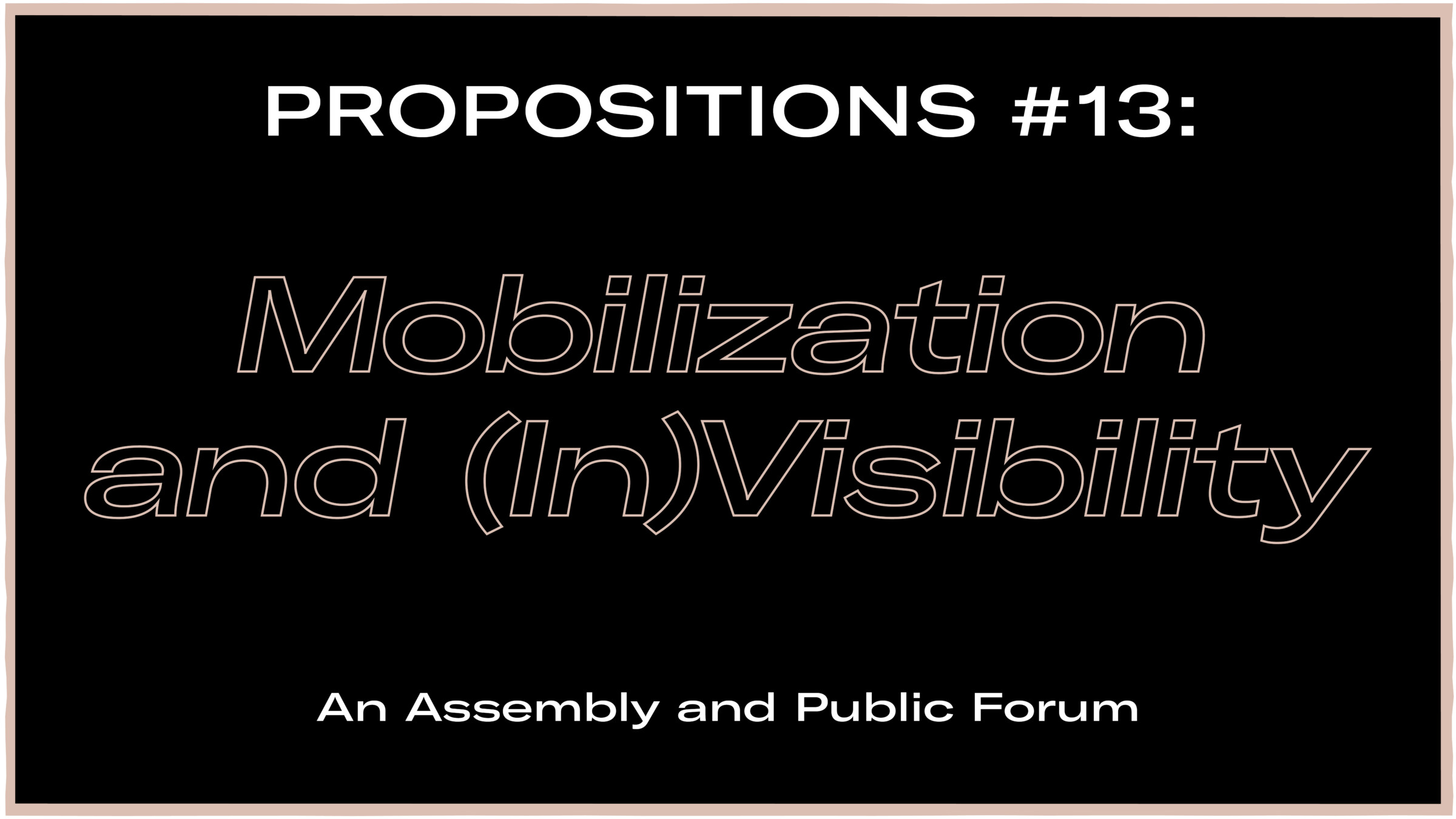 Propositions #13: Mobilization and (In)Visibility is an online assembly and public forum. Aligning with the planned closing days of exhibition Tony Cokes: To Live as Equals (which has prematurely closed due to the Covid-19 lockdown measures in the Netherlands), and the ongoing “How to Assemble Now,” the current focus of BAK’s online forum Prospections, the program engages the aesthetics, praxis, and theories of refusal, insurrection, organizing, and mediation during the pivotal political moment.

The title of the exhibition, To Live as Equals, derives from Cokes’s video Evil.27: Selma (2011). The work–employing text by the collective Our Literal Speed about imagination in the Civil Rights Movement–considers how the instant mediation of protest and resistance might foreclose possibilities for ideating equitable forms of social organization. The proposition in the title “How to Assemble Now,” echoes an enduring enunciation that has taken a distinct tenor in pandemic times. The contributions to this focus of Prospections consider how to rework international and local relations into forms of connection that rely on neither the nation-state nor global neoliberal production, but rather on a nodal basis of specific local concerns within a network of planetary solidarities. Its opening editorial asks: how to work beyond the purported opposition between physical distancing and the necessity to mobilize, envision, and practice proximity and affinity, through comradeship, and continue to be accomplices or co-conspirators to ways of being together otherwise?

With these intersecting prompts, and thinking of the newly-regenerated pockets and coalitions of creative, propositional resistance that have appeared amid this year of globally-impacting (though unequally distributed) hardship, Propositions #13 presents and questions modes and tactics of mobilization now, including: how to gather in a pandemic and post-pandemic (or between pandemic) environments; how and why to avoid detection, contradictions of public visibility, aesthetics of resistance, image production and reproduction; and what strikes or other acts of refusal could look like in these contexts.

Propositions #13 opens as an assembly with a series of consecutive brief lectures, readings, visual, and performative gestures by artists, activists, and researchers, and then culminates in an online public forum.

BAK’s activities are made possible through financial contributions by the Dutch Ministry of Education, Culture and Science and the City Council, Utrecht. Propositions #13 takes place within the context of Tony Cokes: To Live as Equals, which is organized in the framework of BAK’s research itinerary Propositions for Non-Fascist Living (2017–ongoing), and has received extra funding from the VSBfonds, Utrecht; BankGiro Loterij Fonds, Amsterdam; The Netherland-America Foundation, New York; and Stichting Elise Mathilde Fonds, Maarsbergen.

BAK’s main partner in the field of education and research is HKU University of the Arts Utrecht.