Open Call: In Between Seances [CLOSED] 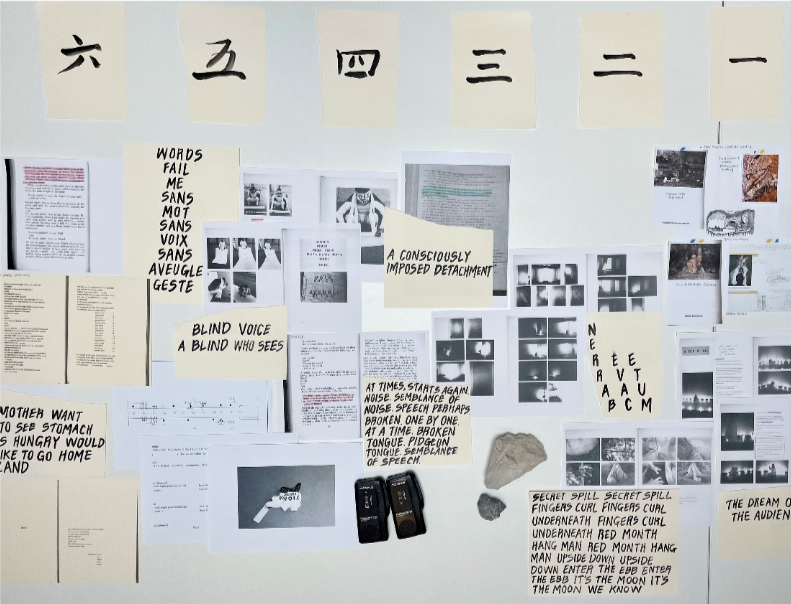 In Between Seances study score (work in progress). Image by Julia Morandeira

BAK, basis voor actuele kunst, Utrecht, launches an open call for participation in the weekly study group In Between Seances. This collective study is based on the groundbreaking work Dictee (1982) by artist and writer Theresa Hak Kyung Cha (1951–1982) and is developed by artist and BAK 2021/2022 Fellow Yen Noh. The study group is part of The Hauntologists (10 September–13 November 2022), a project consisting of discursive, performative, published, and exhibited components convened from within the BAK Fellowship for Situated Practice and taking place at BAK (Utrecht), Gudskul (Jakarta), and IKSV (Istanbul).

In Between Seances engages with the work and life of Cha, a Korean American writer, filmmaker, and artist whose family fled from the dictatorship in the wake of the Korean War and US military occupation of Korea. The collective study revolves around Cha’s experimental and genre-bending novel Dictee which was published a few months before her tragic death. The novel combines autobiography with historical, ethnographic, and auto-ethnographic elements to articulate Cha’s experience as an Asian immigrant woman marked by the histories of racialized and gendered violence. Written in English and French in the near absence of the Korean language, Hangul, this translingual novel takes oral dictation as its format—to a point where linguistic norms become warped. While Cha’s mother was in exile in Manchuria during the Japanese occupation of Korea, she was forbidden from speaking Korean. The sense of displacement that this caused was renewed by the family’s experience of migrating to the US—a type of displacement which was generationally inherited by Cha. Such linguistic violence across generations and borders is what prompted Cha to initiate Dictee, which performs and embodies this dispossession of language as a counter-drive to the pervasive claims of essentialist subjectivity. Traversing the histories of women with different cultures, languages, and myths—from the Korean anti-colonial revolutionary Yu Guan Soon to Joan of Arc, and from Cha’s mother Hyung Soon Heo to Cha herself—the novel addresses distant narratives of intimate histories and political traumas, weaving them into something “anti-documentary” or unarchivable, in resistance to the deed of history writing. It is in this gesture that Dictee invites the reader into an experimental space in which seemingly distant voices of struggles are carried out, both singularly and collectively.

The nine-week collective study group In Between Seances explores these premises and propositions. Its urgency lies in an effort to understand and build collectivities at a surging moment of hyper-visible identity politics in the arts and cultural field. This collective study critically engages with identity and seeks to perform it otherwise, outside of reductive selfhood and individuation. Cha’s life and work is the speculative and pedagogical force of the study. It allows us to engage with what Cha termed a “phantomnation” that is inextricably bound to the impositions of (post)coloniality, manifesting itself in geographical, cultural, and linguistic exile. Breaking away from didactic approaches to collective imaginaries, this study group is a sanctuary in defense of the agency to not speak.

The title of the study group is borrowed from Dictee, playing out on different meanings of “seances.” In English, the term is mostly used to designate meetings for communicating with the dead, but in French it commonly refers to cinema (une séance de cinema). Through various collective experiments, the study group works to draw out the disidentificatory character of the diseuse—literally meaning a female monologist or a fortune teller in French (diseuse de bonne aventure), and historically often depicted as a woman of color by French painters. Cha’s diseuse is neither translatable nor legible, instead hovers between the histories of voices, generating disruptive lines of tones, rhythms, and gestures. She is both language and displacement. She is noise and semblance of speech. She is almost name, before name, and without name. She is dust, sediment, and turned stone—barren, cave, mute—and mythological bari. She is passages and breath. She is mu. This collaborative “character portrait” of the diseuse is the study’s apparatus.

The study group takes place in and around Noh’s installation In Between Seances—a study site that enacts a spatial, sonic, and textual intervention in Dictee and Cha’s larger oeuvre. The seances are composed of group reading, listening, and commenting; walking and film screening; conversing; and scripting—each and all become writerly gestures inhabiting and growing the study space. The study contents and materials of In Between Seances are composed in collaboration with writers, poets, thinkers, and artists such as Hangil Jang, Sora Han, Marina Papazyan, and Hypatia Vourloumis, among others.

Practical Information
The study group takes place weekly on Thursdays, 15 September–10 November 2022, 15–18 hrs. Each seance is followed by a simple dinner offered by BAK at a cost of €5.

Expectations
Participants are expected to attend at least 80% of the seances, which is essential to provide cohesion and memory to the group. Engagement during the sessions is expected as part of a collective thinking and discussion program. Preparatory reading material is made available ahead of each seance.

No prior knowledge or expertise on Cha’s work is required and the study group is open to all Netherlands-based practitioners in the field of culture and beyond with an interest in the topics explored in the study group, including: dis/identificatory practices and processes of dis/translatability and il/legibility, sonic and material dimensions of language, poetical craft, anti-colonial critique, anti-racist and feminist writing, or ritual and shamanic practices, to name a few. An open, curious, and participatory attitude is desired.

Application
If you wish to take part in this study group, please fill in the form at the top of the page.

The applications are welcomed until Sunday 24 July 2022. Participants will be contacted in early August 2022.