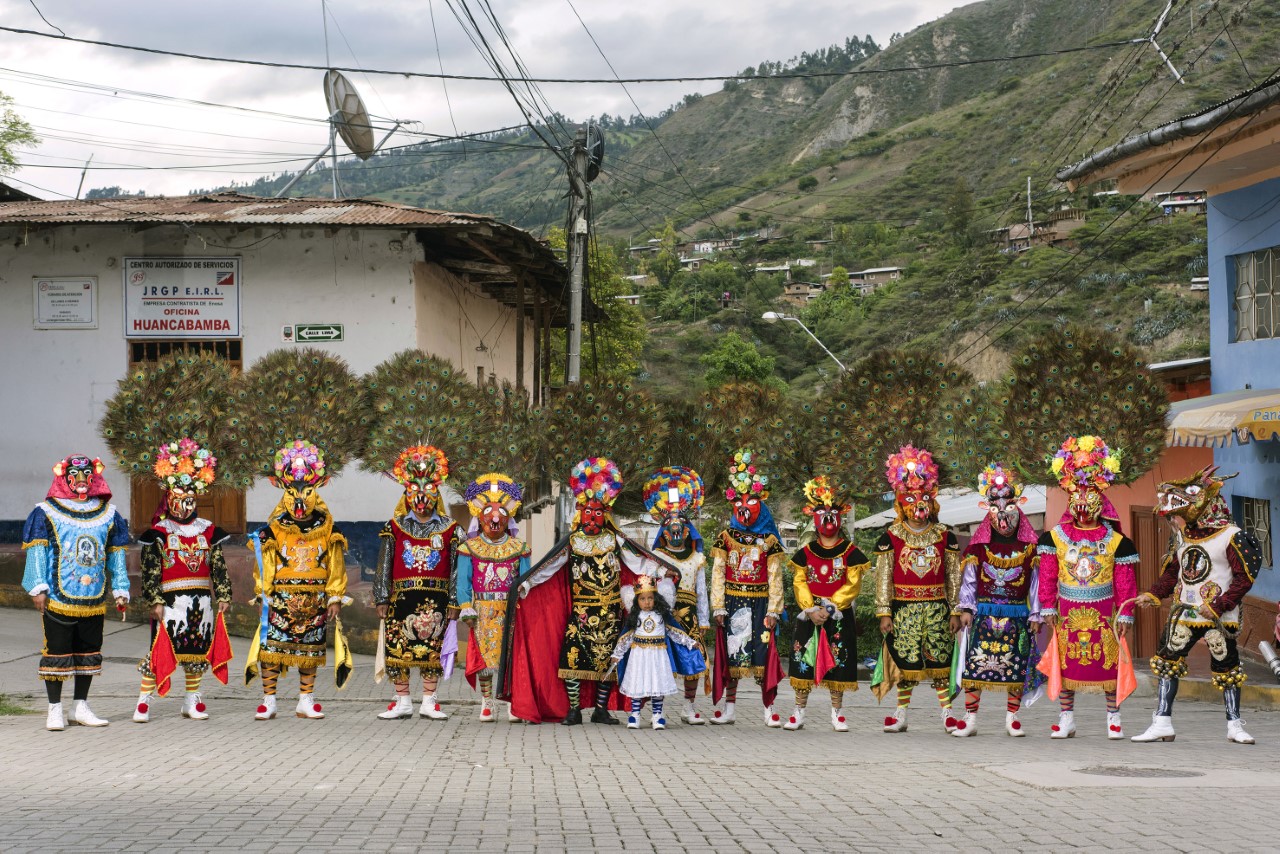 As part of the series of gatherings in the context of No Linear Fucking Time, Ecos y Presagios (Echoes and Presages) features film and video works by artists focusing on Andean territory and landscape as a force of history, tradition, cosmology, and politics. Each of the films proposes alternative ways of connecting different temporalities, reflecting on situated knowledge through circularity, metaphor, and the reenactment of ancestral traditions. This film screening is organized by the artist-interlocutor Claudia Martínez Garay and Netherlands-based independent curator Andrea Elera.

In Felipe Esparza Pérez’s Laguna Negra (2019), a lagoon in Huancabamba, Peru is the scene of a series of mediations that disrupts the supposed boundary between the sacred and earthly, instead appealing to a perception of an always-existing ancestral and ecological in-betweenness. Another work by Esparza Pérez, Diabolicos de Huancabamba (2019), is a visual register of the costumes and characters that integrate the traditional dance of los diablicos (the devils), presenting their dance as a stage for the permanent encounter, conflict, and resistance between indigenous cosmovision and western Christianity.

Miguel Cordero’s Hacer un Pachakchaki (2018) portrays a celebration of the body as a collective thing, with people from Qoricocha and Capaccancha communities performing together as one. This action serves as a critical commentary on the politics of representation of national identity.

Engaging with the environment as an interlocutor has been a constant practice in Antonio Paucar’s performances. In Suspendido en la Queñua, Paucar—who is also part of the exhibition No Linear Fucking Time—hangs from a tree that is native to Peru, slowly unspooling from a cloth that resembles a cocoon.

Finally, Cecilia Vicuña’s Paracas (1983) reanimates an ancient, pre-Colombian textile currently stored in the collection of The Brooklyn Museum, New York. Here the artist visually replaces the textile to its original context of the desert coast of Peru, imagining a different past and present for the material and for the traditions that surrounded it.

The film program is followed by a discussion between Esparza Pérez, Paucar, and independent London-based curator José-Carlos Mariátegui, along with Martinez-Garay, Elera, and BAK Curator of Public Practice Rachael Rakes about ways of challenging the linear view of landscape and about how to revive, resist, and reimagine inheritance and plural futures from Andean geopolitical contexts.

This is a hybrid event. You can purchase tickets to attend the screening in person at BAK, basis voor actuele kunst, Utrecht, or register to receive a link to view the screening online.

Tickets are €7.50 for a regular ticket, and €6 for students. There are also solidarity tickets available, providing free entry for those who otherwise could not attend.

The exhibition No Linear Fucking Time may be visited ahead of the program.

The presentation and discussion will be held in English; the subtitles of the films shown are in English.

This screening is part of No Linear Fucking Time, an exhibition with gatherings, an online publication, and a symposium. The project proposes to unsettle dominant temporalities and model alternate forms of livable time.

Convened by BAK’s curator of public practice Rachael Rakes with artist-interlocutors Femke Herregraven, Jumana Manna, and Claudia Martínez Garay, as well as writer Amelia Groom, No Linear Fucking Time calls upon a wide range of practitioners who examine and embody alternate scales, rhythms, and conceptions of temporal experience in order to explore how looking and working beyond linear, progressive, and globally-synchronized time can contribute to a more plurally-determined and sustainable existence. The project posits that just as time has been a homogenizing imperial force, the rethinking of time can be a key function of anti-colonial presents. The practitioners taking part in No Linear Fucking Time engage critical and propositional models of time, through media such as drawing, painting, made and found objects, machines and moving images, and a variety of creative visual and linguistic expressions.

[1] The title Ecos y Presagios comes from artist and curator David Garneau: “The current season echoes the last and presages seasons yet to be experienced. They are alike, kin but not copies. The same goes for all instances of life—your life is like other lives, but not identical. Cyclical time recognizes reiteration, recurrence and other timely rhythms.”
David Garneau, Radical Currents: Indigenous Art in the Future Continuous. https://muac.unam.mx/constelaciones/assets/docs/essay-david-garneau.pdf.

The realization of this project has been made possible with the financial support of the Dutch Ministry of Education, Culture, and Science; the City of Utrecht; and Stichting Zabawas, The Hague. BAK’s main partner in the field of education and research is HKU University of the Arts Utrecht, Utrecht.

A two-day program of discussions, sound works, film screenings, and DJ sets organized in the framework of the festival Le Guess Who? 2021 in Utrecht.