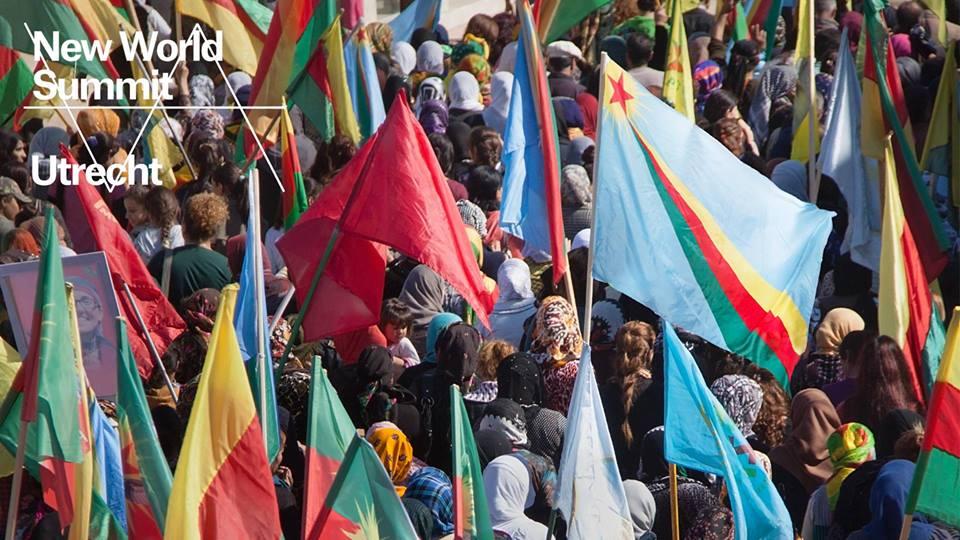 New World Summit: Stateless Democracy is a three-day assembly that explores the possibilities of uncoupling the practice of democracy from the construct of the nation-state. Core speakers are representatives of the Kurdish revolutionary movement, which in 2012 declared Rojava, the northern part of Syria, an independent “stateless democracy” based on principles of self-governance, gender-equality, and communal economy.

The summit takes place at a time of rising ultranationalism, exclusion of refugees, the intensification of the War on Terror, and the emergence of the so-called Islamic State, resulting in nation-states declaring martial law, increasing their surveillance apparatus, and enforcing political exclusion in the name of “defending democracy.” In response, this summit brings together stateless and autonomist movements from all over the world to explore the potential of stateless democracy as a transnationalist paradigm that opposes state oppression in all forms to invest in a new emancipatory politics of the 21st century.

For this sixth summit a temporary parliament is built in the aula of Utrecht University. It was on this site that the Union of Utrecht was signed in 1579, which was to become one of the foundations of the Dutch state. The parliament is thus also a historical intervention, reaching back to the very origins of the Dutch state to engage its alternative in the form of stateless democracy: a space to confront our current crisis and occupy the imaginary of a new, common world.

New World Summit: Stateless Democracy is the culmination of BAK’s long-term collaboration with Staal in his capacity as BAK Research Fellow, which has materialized throughout the course of the last three years in the form of the educational platform New World Academy. The summit inaugurates and is part of the research exhibition Unstated (or, Living Without Approval) at BAK.