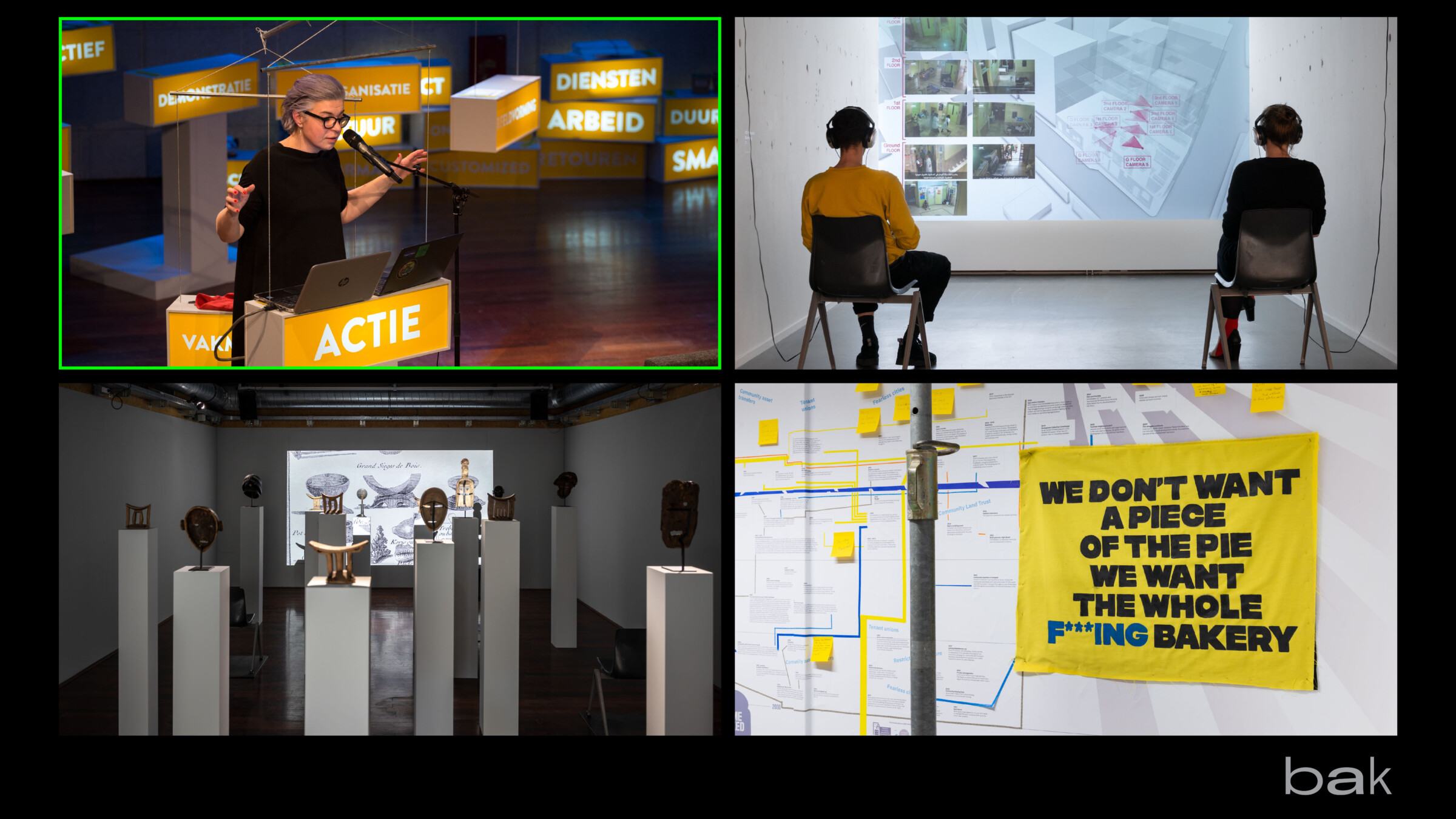 BAK Studies offer an opportunity for participants to inquire into the possibilities for artistic and cultural practices to navigate today’s fractious world engulfed in multiple crises. Tapping into the BAK archives of theoretically informed and politically driven work in the field of art, the studies engage a quest in sync with BAK’s philosophy, namely: intervening in the present conjuncture by learning from concrete examples of artworks and curatorial projects about how they contribute to building or living the imagined as if it were possible.

Each module consists of five sessions that engage in-depth analyses of artistic, discursive, research, and exhibitionary practices. While “Navigating Art, Knowledge, and Social Action” takes a wider view to discuss the notion of art as a critical “aesthetico-political experimentation aided by fiction” across a multiplicity of practices at BAK, “Former West (In the Imperialist Refrain)” and “Toward the Not-Yet: Art as Public Practice” build upon the eponymous BAK projects, delving into how their propositions reverberate in present urgencies and struggles.

Module 1 — NOW OPEN FOR APPLICATIONS!
Navigating Art, Knowledge, and Social Action
Tuesday 6, 13, 20, and 27 September and 4 October 2022
18.30–21.00 hrs CE(S)T
This module engages artistic and cultural practices oriented toward social, cultural, and ecological justice. At the intersection of art, knowledge, and social action, the module drafts possible trajectories for undoing the vocabulary and workings of western modernity in relation to artistic production, publics, and (art) institutions. Rethinking critique, progress, and the nature-culture divide, participants engage in speculative thinking about art as “aesthetico-political experimentation aided by fiction,” and thus not as a site of representation, but of   relation. Understanding art as a research method, a form of knowledge production, and a process of collective creation, the module focuses on art’s propositional, anticipatory, and prefigurative political potentials. The studies engage in the collective building of a lexicon “of and in the otherwise” alongside the notions such as non-linear temporality, visionary fiction, repair, anticipatory learning, and many more. (Please note that this module builds upon and updates the former “Art-as-Politics” course. If you have already attended “Art-as-Politics,” it is recommended that you choose to follow the “Former West” and/or “Toward the Not-Yet: Art as Public Practice” modules.)

Module 2 — Applications not yet open
Former West (In the Imperialist Refrain)
Tuesday 11, 18, and 25 October and 1 and 8 November 2022
18.30–21.00 hrs CE(S)T
At a moment of history when the world seems to have returned to the Cold-War imperialist paradigm, and as the war in Ukraine makes ever more palpable the continued state of brokenness of the world, the “Former West” module of BAK Studies revisits the propositions of BAK’s eponymous project from 2008–2016. Through the prefigurative imaginary “former west,” the project brought forth a means through which to assess not merely the geopolitical category of “the west,” but also imperialism in a larger sense—doing so at the convergence of “the postcommunist condition” (Boris Groys) and the “postcolonial constellation” (Okwui Enwezor). As a project of worldmaking—aimed at undoing the resilient universalization of western-modern narratives, and thus at envisioning and enacting a just world—what learnings does it offer for today’s reality of resurgent vies for imperialist dominance? What are the present-day potentials of this speculative geopolitical and spatial-temporal proposition? Extending the “retroperspective” method of formering, this module of BAK Studies engages texts from the publication Former West: Art and the Contemporary After 1989 (2016), as well as a variety of critical writings on the return of the inter-imperialist world order. In reading and discussion circles, the participants engage in collective speculative thinking about the role of art and culture in present circumstances, building on notions and practices such as aligning the non-aligned, relational ethics, and the political potentials of the planetary peace movement, among others.

Module 3 — Applications not yet open
Toward the Not-Yet: Art as Public Practice
Tuesday 15, 22, and 29 November and 6 and 13 December 2022
18.30–21.00 hrs CE(S)T
This module of BAK Studies builds on the learnings from two projects: Trainings for the Not-Yet (2019–2020), convened by artist Jeanne van Heeswijk and BAK as “an exhibition as a series of trainings for a future of being together otherwise,” and the publication Toward the Not-Yet: Art as Public Practice (2021). Engaging deep readings of both the exhibition and the book, the aim of this course is to inquire into political potentials of imagining and enlivening a chronopolitics of the not-yet. The course begins with a discussion on linear time as not a mere undifferentiated, universal route forward, but as an immaterial infrastructure that undergirds the western-modern capitalist exploitative model—a model of futurity sustained by energy exploitation and the myth of infinite growth, as well as war and ongoing destruction. Thinking through the temporal proposition of the not-yet, the participants familiarize themselves with notions such as: imagination-as-practice; anticipatory learning; exhibition making that engages not representation, but encounter, relation, and collectivity; deep/decolonial listening; and the need for a critical shift from resistance to proposition and thus “re-existence.” The introductory session of this module is joined by van Heeswijk.

The modules are convened by Maria Hlavajova, BAK’s general and artistic director, and include variety of formats such as lectures, collective reading, and collective discussion in an informal atmosphere. The case studies, examples of artworks, and texts issue mainly from BAK’s long-term research itineraries Propositions for Non-Fascist Living (2016–ongoing), Former West (2008–2016), and Future Vocabularies (2014–2017), and include work by practitioners such as Kader Attia, Tania Bruguera, Forensic Architecture, Jeanne van Heeswijk, Rabih Mroué, and Jonas Staal, among others. The studies help participants to familiarize themselves with the main concepts and most urgent questions at the intersection of art, knowledge, and social action.

Besides its learning goals, BAK Studies hope to contribute to a collective exchange of like-minded practitioners from across the world who seek knowledge and a community, as well as a space for a multidirectional, polyvocal conversation prompted by the urgencies of the world at present. BAK Studies thus welcome everyone interested in such a conversation and exchange—conducted in a clear and accessible manner for everybody with or without prior knowledge of the subject(s)—including a wide range of cultural practitioners such as artists, organizers, curators, writers, educators, and others.

Practical information
Applications should be sent in via the form on the BAK website. Please see the buttons at the top of the page.
* Dates and times: Tuesdays on 6, 13, 20, and 27 September and 4 October 2022, 18.30–21.00 hrs CET
* Location: Online via Zoom
* Language: English
* Fee: € 200 (individuals, incl. VAT) and € 350 (institutions, incl. VAT), to be paid before the start of the course. Participants are welcome to pay a larger fee in case they are willing and able to do so; BAK will match these additional funds and offer additional fee waivers to those unable to afford the course fee.
Fee waiver: BAK offers five scholarship positions, for which the participation fee will be waived. If you wish to apply for one of these positions, please check the box in the application form, and let us know why you are applying for a scholarship.

Please note: if we receive the maximum amount of applications we have to close the open call early. This will be indicated as soon as possible on our website; please check before sending in your application.

If you have any questions, you can contact us via publicstudies@bakonline.org