Over the past eight years, Haegue Yang’s artistic practice has involved highly conceptual, slightly odd, or disquieting rearrangements of ready-made objects or spaces, and raw photographic representations of the “uneven” and unstable condition of contemporary society. Behind this conceptual and subtle approach, the artist’s poignant social critique unravels the often-invisible matrix where power structures, individual desire, and the longing for engagement with a community collide.

In this line of ongoing examination, Yang researches the various concepts of community which are illuminated by different artistic projects over the past few decades, and seeks to examine the meaning of the idea of a “community of absence,” a notion suggested by French writer Georges Bataille. Whereas the genre of so-called “community-based art” positions itself in the context of communities based on shared geography or ethical, economic, and political interests, Yang conceives of the possibility of a “community of those who do not have a community.” Thus imagined, such a community, characterized by ongoing self-examination and optimism, would have a heterogeneous composition whose members recognize the transitory and even vulnerable nature of their union. This research resulted in a solo exhibition, performance, publication, and presentation at BAK.

(Haegue Yang’s solo exhibition, entitled Unevenly, was on view from 23 April 2006 till 18 June 2006 at BAK. The opening is accompanied by a joint-music performance by (currently) Amsterdam-based artist and musician David Michael DiGregorio (with Sung Hwan Kim) and Den Haag-based musician Byungjun Kwon (with Yamila Rios). A conversation between Haegue Yang, curator and art critic Nina Möntmann, artist Jeremiah Day, and art historian and art critic Marcus Verhagen took place on 23 May 2006. The publication Community of Absence: Haegue Yang, featuring contributions by Binna Choi, Lars Bang Larsen, and Nina Möntmann and edited by Binna Choi, was published by BAK and Revolver in 2007.

The Measure of Community 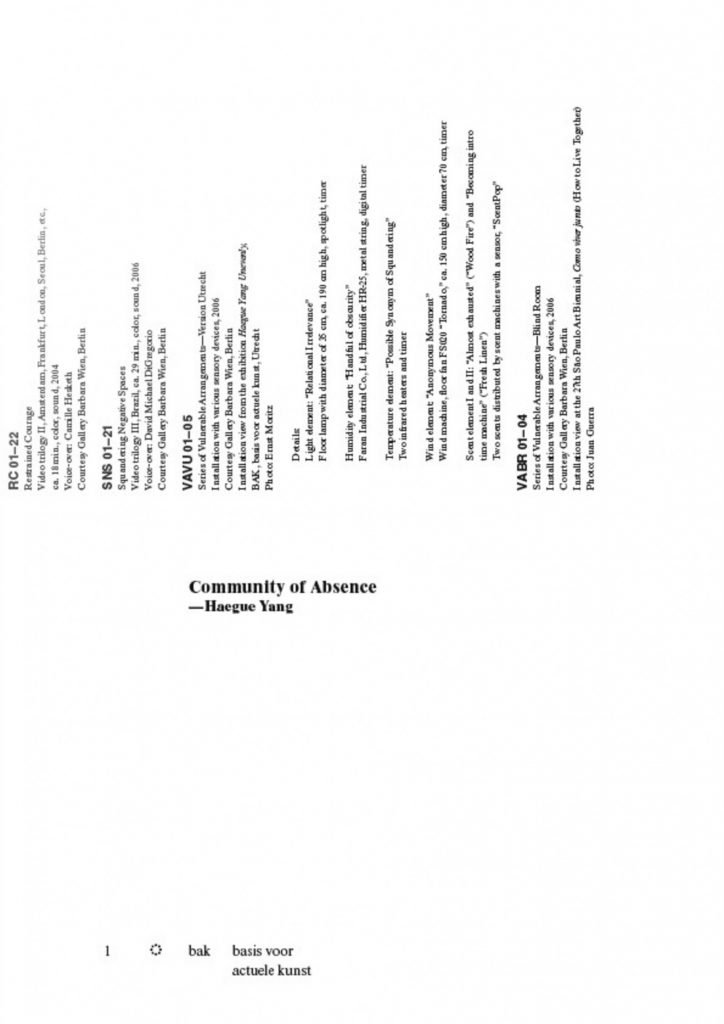